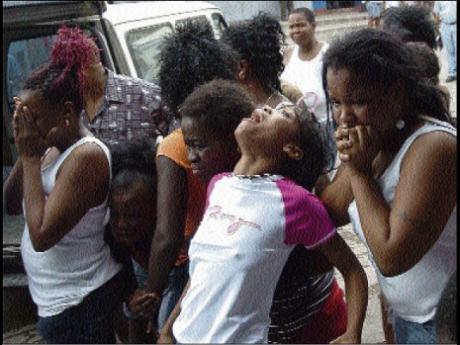 Family members grieve as undertakers remove the bodies of two women from a murder scene on Maxfield Avenue on August 26, 2005. Women are often targeted in cross-border conflicts. - Rudolph Brown/Chief Photographer

"NO INVADERS. If you cross deh so (pointing to an invisible line in the road) yu dead, just dead," is how a 67-year-old woman from the Lyndhurst/Greenwich area describes the repercussions of crossing the 'border' in her war-torn community.

These borders, which are generally created by young men who gain and exert power due to their access to guns and dirty money, affect everyone in the community by restricting movement, violating human rights and perpetuating an atmosphere of fear.

Women, however, experience these criminal restrictions and the culture of violence and turf in uniquely devastating ways.

Bodies and Borders: The Lived Experi-ences of Women and Men in the Bordered Community of Lyndhurst/ Greenwich, a recent study conducted by the Women's Resource and Outreach Centre in partnership with the United Nations Development Fund for Women, found that women can sometimes move across borders freely, but in times of war and tension, they are forced to be particularly cautious.

According to the study, "If a woman has an intimate partner who is involved in gun firing, if they can't catch him, they can lure her (the girlfriend) to places across the border and kill her."

Furthermore, when a criminal gets killed by the police, women in the community sometimes feel that they must block the roads and stage a demonstration to show their allegiance. "Some of them know that these men are criminals, but they feel they do not have a choice but to publicly protest for fear of being branded a traitor or police informer," explains researcher and gender specialist Violet Sutherland.

Interestingly, women are instead often used as 'informers' by gang members. The study notes that "sometimes women are used to carry and get information to and from bordering communities". One participant in the study explained that ... "dem de pon the street fe know things ... whatever they have to do to get the information, they must come back with information. Some of them have to give sex to get the information".

Nevertheless, women should not be viewed as hapless victims of male domination and victimisation. Sutherland, who shared the groundbreaking findings at a public consultation forum with community members and NGOs recently, was keen to point out that women, too, are "active participants and perpetrators of violence ... . Not only do they traffic guns in baby carry-bags, diapers, thermoses and prams, but some also get involved in violence as a way of life.

"These women are often called 'cow girls' or 'gun girls' and are sometimes regarded as even tougher than the guys," says the study.

For more information on the findings of the study send your emails to communications@wrocjamaica.org.