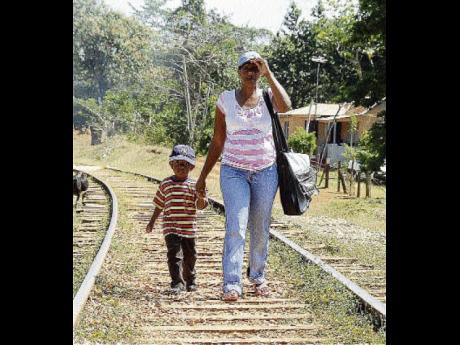 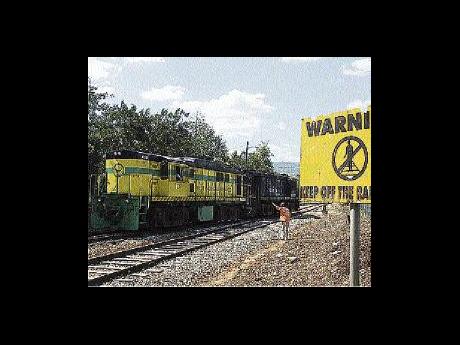 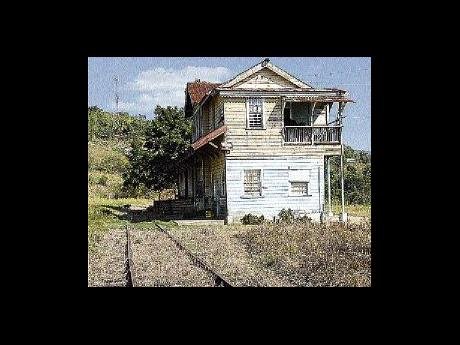 A mother walks her son along the defunct railway tracks in Porus. The lines are used heavily by pedestrians who think it is a safer mode of travel than the busy roadway.

PORUS, MANCHESTER, is one of those extended towns typical of communities caught between the hills and the highway, finding room in elongation at either end of its bulge somewhere in the middle. Those driving through Porus on the south coast trek would hardly distinguish between the sub-communities which constitute the town, but the residents know where one informal name ends and the other begins.

And, while the train tracks are visible to the east of the town, soon, it is hidden by houses, and to locate them again one has to turn off the main road into Spring Grove, one of the vaguely defined areas which make up Porus.

The station house at Porus is one of the oldest buildings in the community.

The tracks are well used - but not by trains, although it is part of the bauxite system and sees occasional use for its intended purpose. Running straight for substantial distances and curving gently where required, from the intersection with the road in Spring Grove to the old station in Porus proper, is about 3,000 well-traversed metres. The Sunday Gleaner soon meets Philip Paul, 'scandal' bag in hand and cap pulled low over his forehead, on his way from the shop to his home. He indicates disparate communities along the visible length of the line with a jut of his chin - Line View, Coney Park, Johncrow Gully, Water Mouth - and says that the schoolchildren use it a lot.

"It safer more than the road. Nuff a de driva dem a cut off de main road an speed pon de ol Porus Road. All 60 dem a do, an if dem lick yu, dem nah stop," he says.

Paul thinks travelling by train is safer than using the highway, too. He remembers the schedule - the 8 a.m. and 10 a.m. diesel from Kingston to MoBay, followed by the noon train the other way, then the 5 p.m. diesel. Plus, there were the bauxite trains in between. He used to take the diesel to Gregory Park on his trips to Caymanas Park ("it make nuff stop"), paying $35 one way, and remembers those who used to actually work on it. "Me have nuff bredren a inspector an conductor an' train driver," Paul says.

"You have less accident. The only way the train go over is a precipice. If it derail, it only go an stop there so," he said.

Now he walks the line, indicating its length and saying, "A pure branch-off. Me go check me friend up there so an' get some ackee."

Further along the line, still walking towards Porus, two women carry three babies, the more robust toting two. The line is in good shape, lumber ties sturdy, rails clean and no buildings causing interference. Goats use the train line, too, and there is human enterprise on either side - a man sits in a tree and uses a power saw to trim the limbs, further along progress is being made on a building.

Stone posts with numbers etched into them, some faded, squat grey cousins to the old mileposts on the island's road system, mark distances along the line. After a gentle curve to the right, one line becomes four, steel creeks diverging from the source, one going to a dilapidated platform and the others continuing along the bulge in the track area.

Here, The Sunday Gleaner meets Junior, who as a 15-year-old would get on the train with tangerines and sell to passengers. He does not hold out much hope of similar journeys, with or without produce, in his lifetime. "Dem no stop de train from run. Dat nah come back a Jamaica. A de wickedes' ting," Junior says. "A it me live by. Train a come, we run outta bush wid tangerine an' spread out. By de time me go Williamsfield, de stock run out."

If not, he would ride the train to Kingston or Montego Bay, depending on how business was going. Now, Junior says, "The train jus' stop, so we haffi try all sort a ting - get a work, rake a man yard. We no love it, but we haffi live."

There is a rare task for a gatekeeper in Porus, as two engines - no carriages - which had gone up the line earlier are coming back down. The horn lows, dual red and white gates are swung open to close the roadway, the engines pull up with a screech. A schoolboy, who would have been born well after the train stopped running, stands on a concrete ledge beside the track and looks at the driver with awe and curiosity.

It pulls out again, the ground vibrates and a now all-too-rare sight navigates the web of steel and soon disappears around the bend. In a container shop, a man and a woman are arguing about the potential restart of the train service. The woman is adamant that it can happen, but the man is doubtful.

"We want some fasta train, all rubber wheel, all underground. Dem too slow," he says. She retorts, "Make we start with what we have. We still have the line."