'It was good time', Linesman forced into farm work 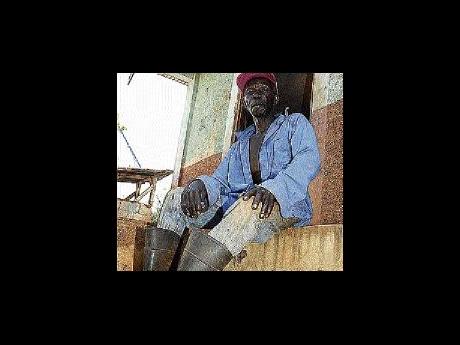 THERE WAS a time when Keith 'John' Edwards travelled parts of the train line Breadnut Hill to Rocky Point every day on the bauxite line, but not sightseeing or finding other ways to pass the time as passengers would. For him and his crew of five or seven others it was work, travelling first by manually powered trolley, and later a motorised one, to inspect and repair the line. He did that job from 1972 to 1980, also going between Porus and May Pen at times from his home in Spring Grove.

"You watch the rail. We used to use nail and then screw spike. When you look and you see these spike start to leave the rail and when you keep driving it down you realise the tie want to change," Edwards told The Sunday Gleaner. To change a tie (the pieces of wood running between the rails), the crew would dig between the bad one and the adjacent tie, then loosen the spikes so the old tie would fall to the ground. "Some of them heavy, some not so heavy," Edwards, who has a sinewy frame, said.

"We have accident, but no huge one," he said. "There were time we have train derail. The track may expand overnight."

The crew would also have to change rails at times, Edwards saying they would see cracks or watermarks at the top, or dust on the flange where it rested on the tie.

His days as a train linesman ended in redundancy "when the service start to go down. Generally, I was here until I get a farm-work ticket". He was "here" for all of seven years. "It (the closure) hurt a lot of people, especially in this area. I would say hundreds of Porus man it hurt," Edwards said. He has children, so "you can just imagine it rough. I turn to little farming and so on".

After making the annual farm-work trek inter-mittently, since 2001 Edwards has been going every year to Vermont. Still, he points out that it is only for six weeks and longs for the train service to return.

"It was good time working out there. You could make two ends meet. Sometimes the sun hot, but it was still good time, better than the time we having now," he said.