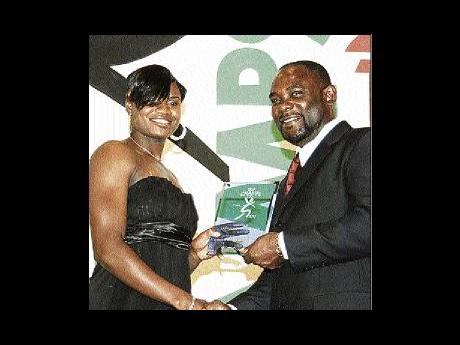 Several of the most outstanding stars of the recent past were absent on Friday night at The Jamaica Pegasus hotel but the awards ceremony held in their honour was still well attended.

Including ticket holders and specially invited guests, several hundred persons turned out for the banquet that sought to recognise the accomplishments of more than 80 individuals and organisations instrumental to the success of the Boys and Girls' Athletic Championships, which celebrates its centennial this year.

Legendary Jamaican footballer Lindy Delaphena, who shone in athletics while a student of Munro College in the 1940s, was also absent. Of course, posthumous awards were made to the legendary Norman Manley, who dominated athletics for Jamaica College from 1910 onwards; Calabar's Frank Laing, Arthur Wint and Herb McKenley, and Kingston College's Lennox Miller.

During the proceedings, there was ongoing conversation about those deserved athletes who were not on the list of awardees, a reality that was not lost on guest speaker Mike Fennell, the president of the Jamaica Olympic Association (JOA).

"I am sure you're going to hear a lot about who was not recognised and who was not rewarded. Obviously, the committee must have had a difficult task arriving at a manageable number of names but, indeed, we would have to recognise that it would be impossible to recognise every-body," he said. "So those who are receiving awards, I would ask you to consider that you are receiving these awards on behalf of thousands of others who have contributed to the success of Champs over the years."

Several coaches were also honoured for their contribution to the championships over the years. They included the legendary G.C. Foster, who coached four different schools - Kingston College, Jamaica College, Wolmer's and Camperdown; Howard Aris, who coached Kingston College to many titles during the 1970s; Herb McKenley, whose name is synonymous with the success of Calabar High; Michael Clarke, who has had success at Jamaica College and Calabar; Constantine Haughton, the architect of Vere Technical's supreme dominance at Girls' Champs for more than a decade; Raymond 'KC' Graham, who coached at Camperdown but found immense success at St Jago High, and Maurice Wilson, who currently leads Holmwood Technical's dominance that began in 2003 and is still yet to end.