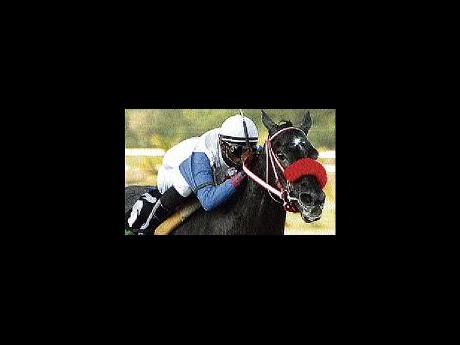 Installed a 1-4 favourite in a field of nine open allowance horses, CASSANOVA BOY extended his unbeaten run to five in scoring by 51/4 lengths from 9-2 chance PRINCE OF PEACE, who failed in his bid to make it four in a row.

Waited with on the bridle in second as his lesser fancied stable companion SATAN'S RULE (26-1) led by two lengths under female jockey Georgina Sergeon, CASSANOVA BOY was sent through leaving the half mile. He turned for home (wide) with PRINCE OF PEACE under Dick Cardenas looming large on the outside, but two cracks of the whip, followed by some vigorous hand riding from Walker saw him pulling clear approaching the distance, eventually winning in a new stakes record time of 1:31.2.

This bettered by one-fifth of a second the previous record which was set by REGAL SELECTION in this very race a year ago.

"This horse can do anything you ask of him," said Walker. "The speed was cheap so I sat in second before asking him to run from the half mile. The more I rode him in the straight, the harder he went ... This is a really talented horse who should go far in racing," added the three-time champion.

Walker and DaCosta also teamed up to win the first race over the straight with 1-4 FLUFFY, an American three-year-old filly owned jointly by Elizabeth DaCosta and Edmund Thomas, as well as BULLET LINE at 2-5 in the fifth and the smart-looking three-year-old debutante LIFEISJUSFORLIVING in the seventh race over 1000 metres round.

Walker, who will sit out a one-day suspension next Saturday, now leads the jockeys' standings with 14 wins - three clear of Shane Ellis, who rode one winner on the nine-race card in 4-5 favourite WILD TRADITION (debut) for trainer Anthony 'Baba' Nunes.