Fe-Mail Ties: The heart of the matter - Celebrating African heritage 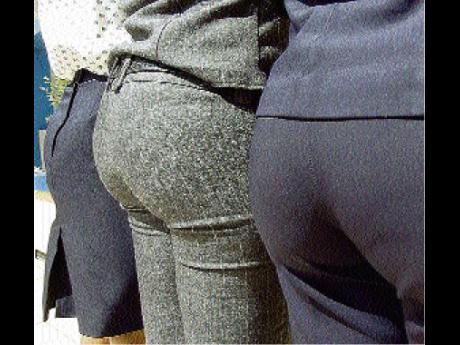 This is the second in our four-part series in celebration of Black History month.

There's a saying in South Africa which sums up African heritage in the physical sense. When referring to beauty and a certain body feature touted by women, there's a twist in the tale, down South a woman's derrière is revered as her African heritage.

Clearly African heritage in the grander sense of the term is, of course, fully recognised. However, the reverence of the shapely African woman is seriously considered as a heritage of which both men and women are proud.

I've said it before and it bears repetition. I believe South African women have one of the most sexy body shapes on the planet.

Of course, everyone is cut from different cloth but the khoi-san people of the Southern-most part of the country and their descendants are famed for sporting a rotund, shapely and inimitable derriere.

When you consider the words more carefully - African heritage in terms of beauty reference, there are many stories to be told. We know that the derrière is adored the world over. Some women are clearly more endowed than others but no matter your dimension, let's say working the African heritage has evolved into an art - an art form which draws many a competitive well-heeled sashay from women, juggling for attention from the opposite sex.

Call it what you like: posterior, bum, booty, bumper, behind, the mesmerising effect is a heritage that can attract riches. In societies where a husband-to-be offers a dowry for his imminent bride, her family, grooming, manners, education and the like are all considered. However, if she has a sizeable posterior, her 'asking price' is likely to be, well, let's say - enhanced.

As we celebrate our African heritage across the world during Black History month, it is important that we trace back the worldwide appetite for the black woman's curvy figure and understand the roots of sexual politics that still yoke us today.

Remember the abhorrent objectification of South African Icon Sara Baartman in Europe in the 1800s. As a young female slave born in 1789 Sara was 'discovered' in Cape Town by a seafaring Englishman who brought her (apparently willingly) to London to create a live 'exhibit'. In his eyes, Sara's unusually large derrière and genitals were an opportunity to make much money. On arrival in the United Kingdom, he exploited Sara's naked form as a live exhibit, paraded around as a freak show.

She died in Paris at the tender age of 25 after a life of humiliation. On her death, French scientist George Cuvier made a plaster cast of her body, removed her skeleton and after removing her brain and genitals, pickled them for display in bottles at the Musee De L'homme in Paris.

The exhibits were on display for over 160 years and, after much diplomatic and civil society pressure, they were removed from public view in 1974. In 1994, President Mandela called for Sara Baartman's remains to be brought home to rest. After extensive negotiations, Sara Baatman was finally repatriated to South Africa in 2002.

As we jump-up, embody and replicate images of black women's sexuality in current-day media images and musical lyrics, what exactly is it that we're celebrating in our African heritage?