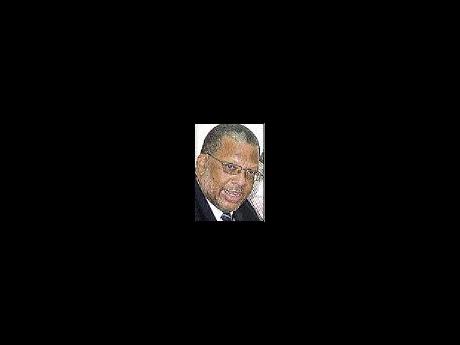 A FORMER national security minister is urging the police to use last week's betrayal by one in their ranks to renew their resolve to help weed out corruption in the Jamaica Constabulary Force (JCF).

But even as Dr Peter Phillips commended the national security ministry on its strong anti-corruption stance, he lashed out at the Government for sending mixed signals by dawdling on the extradition of Christopher 'Dudus' Coke.

Phillips contended that there was a correlation between the Government's refusal to extradite Coke and growing corruption in state agencies.

"It is incumbent on the Government, in other ministries, to demonstrate the courage to deal with not just corruption but high-level criminality ... as it sends the wrong message to the rank-and-file policemen," Phillips argued.

"Stop hiding behind procedural issues and deal with those which intelligence shows have a long history in criminal activity."

"The point I would like to make is that the whole anti-corruption effort be intensified," said Phillips, the last of two national security ministers in the 18-year-old People's National Party administration which ended in 2007.

"I have spoken to many policemen who have told me how distraught, disappointed and ashamed they are," asserted Phillips.

"The ordinary, honest policemen now need to come to terms that there are corrupt officers among them, and to adopt a strong anti-corruption stance," he added.

He stressed that in doing so, police personnel would have to soundly reject the anti-informant culture which has infiltrated wider society.

Phillips said a demonstration of their integrity would now be dependent on their willingness to pull away the mask of corruption at all levels of the force.

"We have uncovered a lot over the past year ... . The honest police have a duty to step up the pace by reporting policemen who are extorting motorists," said Phillips.

Even as he commended the Government for advancing the anti-corruption pro-gramme which, he said, commenced under the previous administration, Phillips said the process needed to be advanced.

"There is need to reform the disciplinary process to facilitate the swift removal of those suspected of corruption," the former national security minister stressed.

He noted that last week's massive arms and ammunition find on Munster Road in Mountain View was not a result of the anti-corruption drive, but was a manifestation of the frightening levels of corruption in the JCF.

"It is insidious, destructive and corruptive," declared Phillips.

He claimed that under his watch, weapons which were recalled were put into safe keeping, disabled and destroyed by the process of smelting, or were dumped at sea.

He told The Gleaner that a monitoring system was always in place under his watch, but emphasised that any system was as good as the persons who run it.