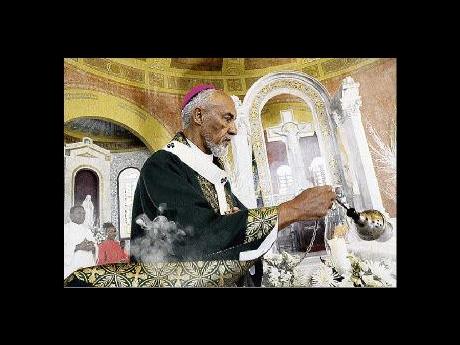 Roman Catholic Archbishop of Kingston, the Most Reverend Donald J. Reece, incenses the altar during the 99th anniversary Mass at the Holy Trinity Cathedral in Kingston yesterday. - Rudolph Brown/Photographer

Archbishop of Kingston, the Most Reverend Donald Reece, yesterday delivered a staunch defence of the role the Jamaican Church plays in education, though conceding that stakeholders could do more to improve service delivery.

"When you think of the schools that the Catholic Church has established in this country, you cannot say that we are not doing anything, but we are always being challenged to do more because the times have changed," he told The Gleaner yesterday, minutes after a Mass celebrating the 99th anniversary of the Holy Trinity Cathedral in Kingston.

"If it wasn't for the church schools on a whole, this society would be worse off in terms of education," he argued.

Reece, who last Thursday officiated at the funeral of Archbishop Emeritus Lawrence Burke - whom Catholics regarded as a stalwart supporter of church-driven education - said the Church was obligated to engineer change in the sector in order to remain relevant.

"We are now being challenged to see what the present system in society calls for, in terms of a shift in either the curriculum or the methodology that is used now in the imparting of knowledge," Reece disclosed.

Catholic schools have long varnished their reputation as being among the highest-ranked learning institutions in Jamaica, particularly at the secondary level, such as Campion College and Immaculate Conception High.

Rector of Holy Trinity, Monsignor Kenneth Richards, said the milestone anniversary was a reflection of strong ties with the community.

"This shows the strong relationship we have with the public, as we remained committed to serve," he said.

The interior of the church has undergone a renovation exercise in recent years, largely through the advocacy of Spanish Ambassador Jesús Silva, who was among hundreds of congregants yesterday.

Holy Trinity is the oldest Catholic cathedral in Jamaica. Celebrations will continue throughout the year until its centennial Mass in February 2011.