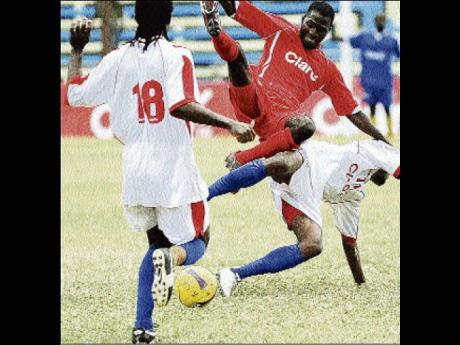 August Town pulled off a mild upset after getting by fellow Premier League outfit Boys' Town 1-0, in the semi-finals of the Claro Jackie Bell Knockout competition yesterday at the Harbour View Mini Stadium to advance to the final.

The game started out at a very lively pace with both teams playing open football, resulting in a lot of goalmouth activity.

Boys' Town were the first to threaten in the fourth minute, when George Vernal got off a shot from an acute angle which appeared to have beaten August Town's custodian Devon Haughton, but ended up in his arms without him knowing much about it.

Three minutes later, it was Boys Town's keeper, Philmore Crumbie who had fortune on his side, after Jermaine Fletcher's side-footed effort struck him before rebounding to Aphas Bernard, whose effort from close range lodged in the Crumbie's grateful hands.

It was then Boys Town's turn to go on the attack with André Wheeler unleashing a powerful drive from 17 yards out, which saw Haughton, who had an outstanding game going, fully stretch to tip over. The clearest chance of the half, however, fell to August Town's Kemal Cockburn, who completely missed the ball after Thenstead had made a lovely run down the right flank before pulling the ball back to him unmarked in the middle of the penalty area.

The second half did not possess the same quality as the first half but it did produced the goal when Cockburn played through a ball, which should have been dealt with by the Boys Town defence, but instead it got through to Thenstead who kept his nerves to easily beat Crumbie.

Andrew Price, coach of Boys' Town did not think his team turned up for the game.

"It has been the story for the entire season, not scoring goals and if you don't score goals in games you can't win," Price said. "I don't think we played with any intensity today."

August Town's coach, Paul Young was very pleased with how his team played.

"I am very elated, the players worked hard and we got a good result. (It was) Not the prettiest of games, but we had a game plan and I am proud of the way we finished the game."

Cavalier got the better of Tivoli Gardens 2-1 after extra time in the second semi-final after both teams ended the regulation period locked at 1-1. Tivoli's Owen Powell (62nd minute) gave his team the lead before the KSAFA Super League heavyweights stormed back through Donavan Alvaranga (80th) and David Laylor in extra time.