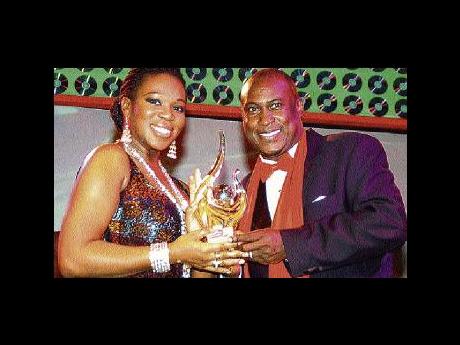 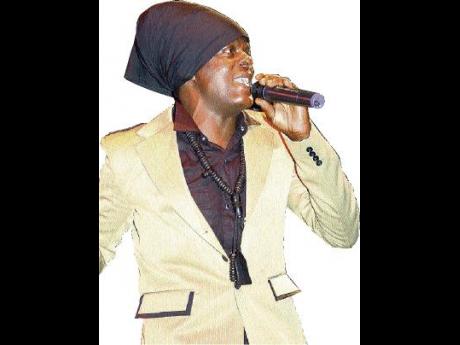 Richard Burgess (right) hands over an award to India Arie at the Excellene in Music and Entertainment Awards at The Jamaica Pegasus last Thursday. - Photos by Winston Sill/Freelance Photographer

By the time the Bonner Brothers took the stage last Thursday night, they were performing to mostly white chairs that were in the gardens of The Jamaica Pegasus hotel at the sixth staging of the Excellence in Music and Entertainment (EME) awards.

Of the four siblings, Pliers was the first to take the stage at approximately 1 a.m. He did about three songs before he was followed by Spanner Banner, who did another three songs. This was also the case with Richie Spice. The only brother who did one song was newcomer Snatcha Lion. Though weary, the guests who remained seemed to enjoy their performance.

So long was the show that Vybz Kartel, who got the Male Deejay of the Year award, did not stick around to receive his award, as it was the last award to be announced. Spice won in the female category.

The EME awards was especially long for persons who were punctual for the Red Carpet entry and cocktails that should have taken place between 7 and 8 p.m. But at the scheduled 8 p.m. start of the show, the guests were just filing in. Most of them immediately went to take pictures on the red carpet. The ceremony did not begin until 8:45 p.m.

Prior to the Bonner Brothers' performance, there were many other performances, making the event seem like an award and stage show. Wasp's performance lacked stinging power, as he did not display much energy. Gramps Morgan and India Arie thrilled the audience with Therapy, before the United States-based R&B singer did Ready For Love, to the delight of the audience. Lady Saw was Marion Hall on the night, as she did two one-drop songs.

There was also a tribute to Studio One by Christopher Martin, Hezron, Jodi-Ann Pantry, Nicky B, Cherine Anderson, Romain Virgo and Nadine Sutherland.

Although he collected his award earlier, Toots Hibbert returned to the stage to perform. While the people appreciated his set, they were now very tired, as it was after midnight. By the time NFL player Morlon 'Ultimate' Greenwood was ready to perform, most of the guests had already left.

In the honour awards section, Toots Hibbert and Denroy Morgan were named as Role Models of the Year. Hibbert gave a quick speech, but Morgan spent quite some time on stage thanking and giving 'big ups' to almost every community, parish and Rastafarian sect that exists in Jamaica.

There was obvious tension when Chino, who was followed by what seemed like an army, and Portmore Empire's Jah Vinci, went on stage to collect the Breakthrough Artiste of the Year award. This was no surprise as the Portmore Empire and the Big Ship camp have been at odds in recent times. In accepting his plaque, Chino said, "Big up the fans, the fakers and the enemies."

Despite her no longer being a part of the Portmore Empire, Lisa Hyper thanked the group for helping her to be named Best New Female Artiste. "Big up mi dads, Vybz Kartel. Nutten nuh change, Gaza mi seh same way," she said.