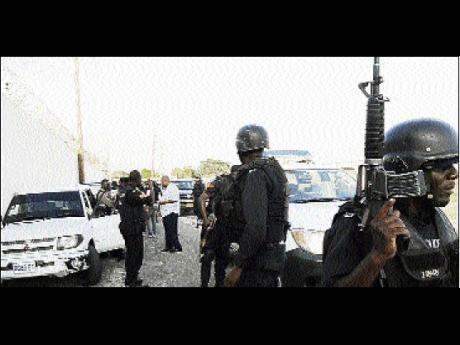 Policemen prepare to enter the Horizon Remand Centre yesterday as a riot was under way at the Spanish Town Road, St Andrew, facility. - Norman Grindley/Chief Photographer

Approximately 100 policemen rushed to the Horizon Remand Centre on Spanish Town Road in St Andrew yesterday, after a prison riot broke out during the mid-afternoon hours.

National Security Minister Senator Dwight Nelson told The Gleaner yesterday that 128 prisoners in three security areas managed to remove the locks from their cells before gathering in a corridor.

According to Nelson, all of the prisoners, except for one who fell and was receiving medical attention, were rounded up and taken back to their cells.

"One of the things that concerns me is how prisoners are able to get the locks removed from their cells," Nelson noted. "I find that quite astounding."

The minister said he received official reports that six persons were injured when the police used force to contain them.

Prison sources said two inmates were shot during the riot. However, last night the national security ministry said 36 inmates and nine correctional officers had been injured.

The riot began as inmates protested poor living conditions at the facility, including the lack of water caused by the shortage which has been affecting several parishes, and the failure to provide breakfast before noon.

During the commotion, members of the police force cordoned off a section of Spanish Town Road, and at least two Jamaica Defence Force helicopters patrolled the immediate area surrounding the prison including May Pen Cemetery.

Nearby residents gathered outside of the cordon, watching as police and military vehicles entered and exited the facility. One woman shouted at passers-by that the prison system was inhumane.

"Dem a sabotage di human being dem," she declared.

However, Nelson said some of the measures put in place to "stem the flow of contraband into the prison" had also fuelled the riot.

Although attending a drug enforcement conference in Montego Bay, St James, at the time of the incident, Nelson said he had been receiving regular updates from acting Police Commissioner Owen Ellington, as well as Commissioner of Corrections June Spence-Jarrett.