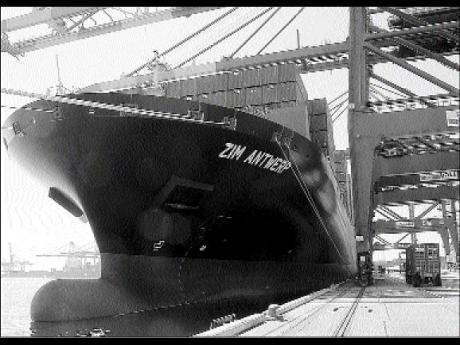 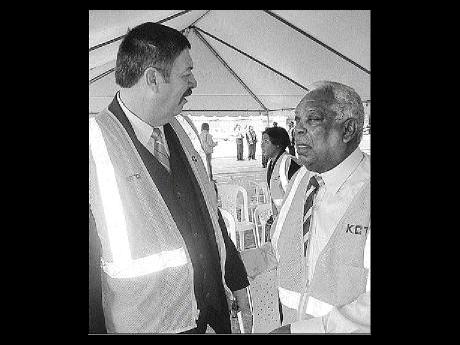 The Zim Antwerp, the largest container vessel ever to berth in Jamaica. - Contributed

Picture the height of a Kingston skyscraper. Now imagine it floating in 45 feet of water in the Kingston harbour. That is just about the height of the Zim Antwerp, the largest container vessel ever to berth in Jamaica.

The Zim Antwerp called Jamaica on February 2 during its maiden voyage. The vessel is 334 metres long and 63.5 metres in height with a capacity of 10,062 20-foot container equivalent units (TEU). The vessel made a bunker call in Hong Kong and sailed via the Cape of Good Hope to Jamaica.

According to Captain Chaim Shacham, senior vice-president of operations, Zim America Integrated, the Zim Antwerp is the fourth of Zim's mega vessels and the second in the series of 10,000-TEU series. "Post Panamax vessels were expected for 2014, but Zim has done it in 2010 in Jamaica, two-and-a-half years after Kingston celebrated the opening of the Western Berth," Captain Shacham said. He was speaking at the welcoming ceremony for the Zim Antwerp last Thursday at the Kingston Container Terminal (KCT).

Captain Shacham thanked the Port Authority of Jamaica (PAJ) for its support for the almost 40 years that Zim has been sailing to Jamaica and pledged the company's continued support for the island.

Acting Prime Minister Pearnell Charles also lauded the PAJ for its forward planning, which has positioned the port of Kingston to capitalise on the business which is to come, with the completion of the expansion of the Panama Canal in three years. "This planning has enabled the transshipment terminal here in Kingston to be one of the few facilities that can accommodate any size vessel, including this new class of vessel with a capacity of 10,000 to 12,000 TEUs," Charles said.

The Panama expansion, he said, will lessen the journey of vessels as they will no longer have to travel via the route of the Cape of Good Hope to transport cargo from the Far East to the Americas.

Noel Hylton, president of the PAJ, in response, thanked Zim for its continued business, noting that the relationship between the two has strengthened over the years.

Hylton noted that the Western Berth was built to accommodate Zim's mega liners and that plans had been ongoing for the last 10 years. He highlighted, however, that the PAJ achieved its vision in a shorter time frame. "Jamaica is one of the few ports that can handle a vessel of this size. Other ports are rushing for 2014 but Jamaica is ahead of them and we want to continue to be ahead," Hylton said. Hylton noted that by between 2013 and 2014, at least three or four such vessels will be sailing to Jamaica. He thanked the management, workers and unions of the port of Kingston for their loyalty. He had special praise for the KCT workers and the SAJ for the high level of productivity on this vessel which, he said, was an average of 42 container moves per crane hour.

The Zim Antwerp is one of the new generation of mega container ships in the cargo shipping industry. Built by the Hyundai Corporation of South Korea, construction was completed last December. The mega vessel can carry 18 wide containers on deck.

'This planning has enabled the transshipment terminal here in Kingston to be one of the few facilities that can accommodate any size vessel, including this new class of vessel with a capacity of 10,000 to 12,000 TEUs.'