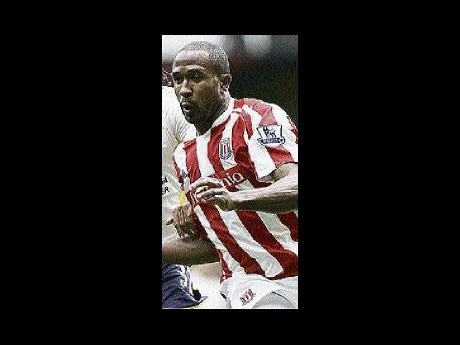 Reggae Boy Ricardo Fuller was arrested at the weekend following what his English Premier League club, Stoke City, calls "an incident in a nightclub".

Stoke said that Fuller was detained by police in the early hours of Sunday in the Hanley suburb of Stoke.

Fuller had played in Saturday's 3-0 win over Blackburn without scoring.

According to a report on the sportinglife.com website, the Jamaican Reggae Boy is alleged to have assaulted a 21-year-old man in the bar area of JFK nightclub.

A statement on Stoke's website read: "The club can confirm that Fuller was arrested in the early hours of Sunday morning following an incident in a nightclub in Hanley, Stoke-on-Trent. We will be making no further comment at this time."

A Staffordshire police spokes-man said: "At 1a.m. on Sunday February 7, an incident occurred at JFK nightclub in Trinity Street, Hanley, Stoke-on-Trent, following which a 30-year-old male was arrested on suspicion of assault. He has been bailed pending further inquiries."

The Jamaican, who joined Stoke in August 2006, is due to report back to the police next month.

Fuller has played over 60 times for the Reggae Boyz, scoring just 11 goals.