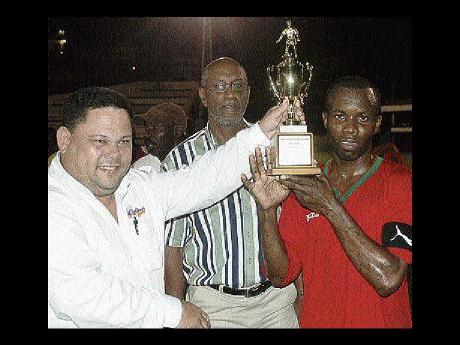 Seba United snatched victory from the jaws of defeat on Sunday night when two goals by striker Jermie Bucknor in the last five minutes gave them a come-from-behind 2-1 win against Reno FC in the 2009-10 Captain's Bakery Western Super Football League mid-season finals at Jarrett Park in Montego Bay.

"We played with a lot of determination and purpose and in the end, the character we showed paid off for us," said Seba United's coach Hopeton Gilchrist. "We are looking to take this form all the way to the title, as our aim is to get back into the Digicel Premier League."

For the Reno team, which was losing for the first time this season, the defeat must have been a bitter pill to swallow, as, after being given a 39th minute first-half lead by Craig Foster, they looked like cruising to victory before Bucknor struck in the 85th and 88th minutes.

In what was an intriguing contest between the two former champions, Seba United started out looking good and just missed taking an early lead. In the 19th minute, the wily Kemar James broke free before the Reno goal, but his powerful shot flew over the crossbar.

Seba went on to squander another chance through Bucknor in the 30th minute when he overdribbled before the goal and lost possession to the advancing goalkeeper. A minute later, Reno all but scored when a powerful header by Patrick Graham was brilliantly saved by goalkeeper Neil Lynch.

With six minutes to go in the half, Reno took the lead. Foster pounced on a low cross inside the goal area and his well-placed header sailed past the goalkeeper, giving Reno a 1-0 half-time lead.

Reno should have doubled their lead seven minutes into the second half when Nyron Davis broke free before the goal, but instead of shooting, he elected to pass the ball to team-mate Martin Williams. The pass, which was wayward, was intercepted by a Seba defender.

Mid-way the half, Seba United went into overdrive, peppering the Reno defence with an all-out attack. They came close on several occasions, especially through Wilfred Smith, who had two close-range efforts well saved by the Reno goalkeeper.

With time running out in the game and Reno looking like hanging on to their slim lead, Bucknor pounced on a superb cross from Iton Scott and fired a powerful grounder past the goalkeeper, making the score 1-1.

With two minutes to go in the game, Bucknor sealed victory for Seba when his close-range shot struck the upright and rebounded to him. His second shot was bang on target, giving the Montego Bay team their 2-1 win.