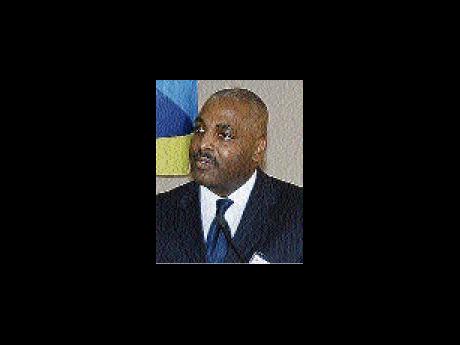 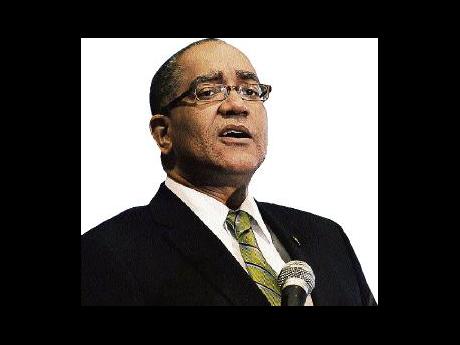 Brian Wynter, governor of the Bank of Jamaica, will have say over which financial institutions receive help under the US$950 rescue fund being created - file

The establishment of the US$950 million (J$85 billion) Financial Sector Support Fund (FSSF) created under the stand-by agreement between Jamaica and the International Monetary Fund is considered 'crucial' to stability, according to documents obtained by Wednesday Business, which acknowledge that without

the rescue fund the bond recall has the potential to derail the financial sector.

But even with the contingency fund, stress tests have revealed that under 20 per cent of securities dealers are

likely to become under-capitalised and a few may go broke or become 'insolvent in some scenarios', the authorities fear, as a direct result of the firms' participation in the Jamaica Debt Exchange (JDX).

The JDX had 97 per cent take-up as at February 3, Finance Minister Audley Shaw reported last week. The trades will be settled on February 16.

But only those financial institutions that traded in at least 90 per cent of their holdings will be eligible for FSSF funds were they to require liquidity support.

The FSSF is being seeded by three multilaterals in the form of loans:

Inter-American Development Bank - US$300 million and

The fund will serve two liquidity support functions: to ease pressures off dealers facing excessive margin calls, through a US$350 million financing window; and for capital injection from a US$600 million pool.

The problems must be directly traceable to fallouts from the JDX for financial institutions - dealers or banks - to qualify for support.

The banks and insurance companies have weathered the stress tests and are deemed capable of withstanding the fall in income from the new bonds, but there was a suggestion in the documents that they could end up breaching regulatory risk provisions, requiring 'forbearance' on the part of the authorities in the form of phased introduction of risk weightings.

The FSSF also has provisions to recapitalise banks under 'limited' circumstances, but only those whose failure would create systemic risk and that cannot otherwise access external funding to refresh their capital base.

The IMF is insisting that such a move by government to recapitalise a bank under the FSSF can only occur in extreme circumstances - 'a rare step taken as a last resort' - and would be 'subject to prior consultation' with Fund staff.

The first step for an under-capitalised bank, however, is for its shareholders to provide the required support.

The FSSF will be established by the Government of Jamaica (GOJ) and managed by the Financial Regulatory Council (FRC). The council comprises representatives of the Bank of Jamaica (BOJ), which chairs it, the Financial Services Commission (FSC), Jamaica Deposit Insurance Corporation and the Financial Secretary of the Ministry of Finance.

The council's Technical Working Group, which comprises BOJ and FSC representatives amd is chaired by the central bank, will determine which financial houses qualify for FSSF assistance and make recommendations to the FRC.

The council, it appears, will operate the FSSF with a fair amount of autonomy, for while it is answerable to the GOJ, there is expectation on the part of the IMF that the FRC will be granted the authority to recapitalize qualified financial institutions whose balance sheets become impaired because of the JDX.

The terms under which dealers and banks can borrow from the FSSF have not been fully disclosed, but financing will be in the form of loans. The loans will have a life of no more than six months, and can be secured with GOJ bonds.

The collateral provided will be counted at par value, imposing no haircut as now done by the central bank under non-JDX liquidity financing. A haircut is a percentage subtracted from the face value of securities used as collateral to back a loan.

Government will hold equity or preferred shares, or subordinated debt, in the institutions recapitalized and take seats on the board.

Failure to repay the FSSF loan within the period will attract a 'punitive' rate levied atop the cost to borrow the funds.

Liquidity support above an undisclosed 'trigger level' will result in intervention by either FSC or BOJ, utilising what is referred to as a 'ladder of enforcement'.

The regulatory requirement for capital adequacy is now 10 per cent.

The regulators will impose restrictions on banks or dealers whose capital falls below 8.0 per cent of risk weighted assets.

If capital falls to 5.0 per cent or lower, the regulators will either place the firm under temporary management until conditions improve, or intervene 'permanently'.

Firms seeking assistance from the FSSF must produce a five-year business plan "substantiating their viability and ability to comply with minimum capital requirements" by December 2010 for banks and other deposit-taking institutions, and December 2011 for non-bank operations.

There is no guarantee that the JDX will realise all the savings envisioned - a projected J$40 billion in year one - or that it will not disrupt the financial system, according to IMF documentation, but the Fund says the FSSF should protect against the latter risk.

The FSSF is expected to have a life of two to three years, tracking with the 27-month tenure of the stand-by agreement.