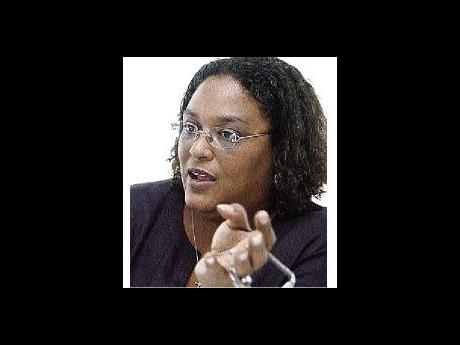 The main opposition Barbados Labour Party (BLP) says it is opposed to any wage freeze in the public sector, as the David Thompson government considers ways to deal with a contraction in the local economy.

"The worst thing that government can do now is to further dampen spending in this country. If you want to see more people go home, then make sure that you go down that road," BLP leader Mia Mottley told a public meeting.

Last week, Prime Minister Thompson gave clear indication that he was in support of a wage freeze in Barbados, and warned that any slight increase in the wage bill would have serious implications because it meant the possibility of cutting expenditure and reducing social programmes.

But Mottley, armed with a document from the Interna-tional Monetary Fund, said that since 2008 the Washington-based financial institution had made recommendations to the government.

"Thompson already told you that there will be a reversal of spending to cut goods and spending to two and a half per cent. Remember he said, 'been there and done that'. This report also told you that they should increase the value-added tax, and you already heard David Thompson put it on the table, in the last budget."

Mottley said that any talk of a public-sector wage freeze at a time of high inflation and problems for persons to meet their monthly mortgage, was unacceptable:

"We have already done the mathematics, and we know that what this government has to find in order to give you a decent wage increase is not beyond the government of Barbados."