Nurses walk out of reclassification meeting 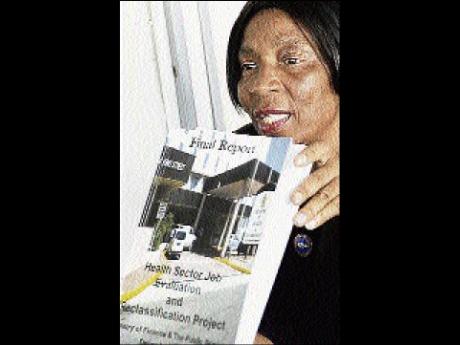 Edith Allwood-Anderson, president of the Nurses' Association of Jamaica (NAJ), addresses nurses during an emergency meeting at the NAJ secretariat in St Andrew yesterday. - Rudolph Brown/Photographer

The island's nurses are dissatisfied with the Government's decision to give health-care workers four weeks to review documents outlining compensation levels under a reclassification exercise.

The documents were released by the Government at a meeting with health professionals yesterday.

Senator Arthur Williams, state minister in the Ministry of Finance and the Public Service, told The Gleaner that while the documents were completed in December as planned, the meeting was convened to discuss the contents as well as update the professionals about an Industrial Disputes Tribunal (IDT) award in the NAJ's dispute with the Government.

Williams said the four-week time frame was given to allow health professionals a chance to analyse and make submissions.

However, NAJ President Edith Allwood-Anderson was upset about the decision, stating that the request demonstrated blatant disrespect as the Government should have set a date to hand down the reclassification from mid-January.

She said her 13 team members walked out of yesterday's meeting as it left them displeased.

"The IDT had ruled that the Government should move to set a date for the implementation of the reclassification and, to date, we haven't seen a date," Allwood-Anderson said as she updated the nurses on the Government's decision during an emergency meeting at the NAJ secretariat in St Andrew.

Allwood-Anderson said the nurses would continue their island-wide duty campaign, which has seen them attired in black/white.

The nurses have been wearing black for the past two weeks to observe "a period of mourning over the Government's delay in implementing reclassification".

The nurses and the Government have been at loggerheads since 2007, when the administration failed to implement the promised reclassification.