In turf wars, kids as young as three groomed as 'shottas' 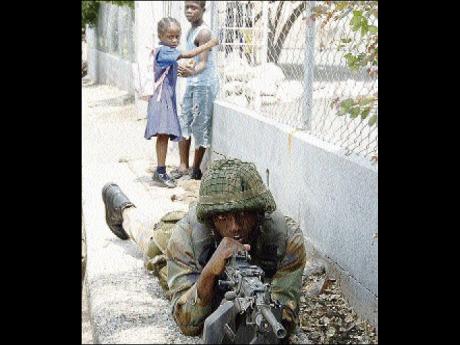 Two children seem to cower in fear as a Jamaica Defence Force soldier takes up a defensive position during a police-military operation at Matthews Lane, downtown Kingston. A study shows that children in inner-city communities were disproportionately exposed to crime and violence, many of them as young as three years old being taught to handle guns. - file

Children are often taught that the sky is the limit. But for those living in the Greenwich/Lyndhurst area and other Kingston inner-city communities, ground-level limitations abound - restricting access to education, security and ambition.

Bodies and Borders: The Lived Experiences of Women and Men in the Bordered Community of Lyndhurst/Greenwich, a recent study conducted by the Women's Resource and Outreach Centre in partnership with United Nations Development Fund for Women, found that the development of children may be blighted as a result of the imposition of borderlinesby thugs who are themselves sometimes children.

One participant in the study recalled that in "one section of the community, there were three years of war, and for those three years, children between those borders could not attend school".

Children spend an average six years in primary school, so students in rift-ravaged communities could lose half their school life at the primary level.

The participant explained that the don, a gang leader, in the community later tried to garner resources from politicians and businesspersons in the area to help the affected children to bridge the gap created by the feud.

Despite these efforts, such children would still be three years behind their age/grade level.

However, access to education is only part of the developmental struggle for children. Bodies and Borders researcher and gender specialist Violet Sutherland pointed out that boys as young as three years old were being trained to hold guns and that by age eight they clean and build guns.

The study further noted that borders existing in inner-city communities were created by very young men.

"No big man not involved in the creation of borders and boundaries ... sometimes is 15 years old ... some of whom are illiterate," one participant observed.

Confirming what has already been suspected by various entities, the study found, "These are the same boys who run parallel versions of the community gang and border issues in schools."

However, many participants believe that fathers do not generally recruit their own sons into crime and, in fact, can be very protective of them. Still under certain conditions they have been known to make a life of crime the family business. One participant in the study explained that if a number of family members have died from the gun, "the next generation jus know seh they have to defend themselves".

When it comes to sexual exploitation, both boys and girls are affected, but girls are especially vulnerable, the report indicated. The study noted that children are often used by dons for sexual favours as soon as "dem touch dem prime".

"As a result, some a de madda dem just ship dem (the girls) out of the community and report dem missing," a participant revealed.

For more information on the findings of the WROC/UNIFEM study, email communications@ wrocjamaica.org.