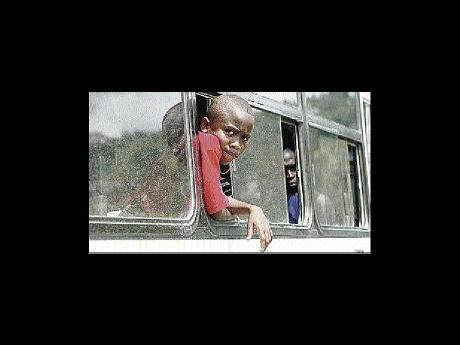 In this August 16, 2005 Gleaner photograph, a Haitian boy sits inside a bus with other compatriots who had fled their homeland as they await immigration processing at Sangster International Airport in Montego Bay. There are new fears that Haitians affected by last month's quake might seek safe haven in Jamaica and request refugee status. - File

Jamaica's policy on refugees is guided by the 1951 Convention Relating to the Status of Refugees (the Convention) and the 1967 Protocol Relating to the Status of Refugees (the Protocol). The island acceded to the convention on July 30, 1964 and to the protocol on October 30 1980. Under the convention, Jamaica has an obligation to consider all applications for refugee status made in this country. However, each application for refugee status is considered on its own merit.

Who is a refugee?

In accordance with Article 1A (2) of the convention, a person qualifies for refugee status if:

"... Owing to a well-founded fear of being persecuted for reasons of his or her race, religion, nationality, membership of a particular social group, political opinion is (residing) outside the country of his or her nationality and is unable or, owing to such fear, is unwilling to avail himself or herself of the protection of that country, or who, not having a nationality and being outside the country of his or her former habitual residence is unable or, owing to fear, unwilling to return to it."

In other words, if, based on any of the reasons mentioned above, there is a genuine fear for one's life, such person may qualify for refugee status.

To be eligible to apply for refugee status, a person must be in Jamaica at the time of making the application. The application can be made upon arrival in Jamaica or subsequent to entry.

Determination by an Eligibility Committee

An Eligibility Committee, which comprises senior officials of the Ministry of Foreign Affairs and Foreign Trade, the Attorney General's Chambers and the ministry responsible for immigration matters (at present, the Ministry of National Security), is thereafter convened. The committee considers the case presented by the individual and recommends whether he/she should be approved or denied. If the application is denied, the individual is afforded the right to have his/her application reviewed. At this stage, the review is conducted by a refugee review body.

Once the process has been exhausted, all unsuccessful applicants will be removed from the island.

Once an applicant is granted refugee status, the State has a responsibility to facilitate his or her access to social and welfare services. He or she is also allowed to work on the island and to hold a travel document (not a Jamaican passport, as the refugee is not a citizen of Jamaica).

PICA Corner is a collaboration between The Gleaner and the Passport, Immigration and Citizenship Agency. Send questions, comments and suggestions to editor@gleanerjm.com and PICA will respond.