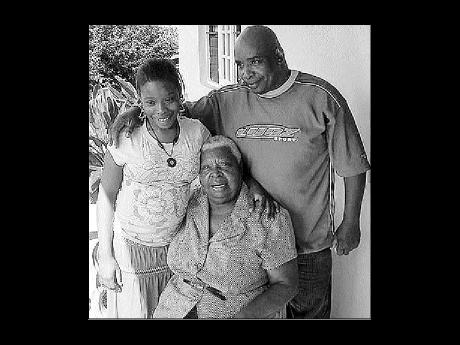 Teenage Haitian national Paule Sabrina Brown, who was flown to Jamaica 11 days ago from the earthquake-ravaged Haiti capital, Port-au-Prince, was on Monday reunited with her father in Anchovy Gardens, Port Antonio, Portland.

It was an excited David P. Brown who told The Gleaner of his difficulty in coping with the news that his 15-year-old daughter had been displaced by the January 12 temblor.

"I cried for hours," he said. "I couldn't sleep, and I kept remembering her face. I visited Haiti for the better part of 10 years, while working on a cruise ship, so I knew it was always going to be difficult for those living in that country once disaster strike."

He continued: "It was basically like a nightmare, and I kept seeing some horrific scenes on television in the United States, and there were just bodies, and disaster everywhere."

The 45-year-old man, who flew in from the US city of Miami to see his daughter, wasted no time hugging and laughing with his child, amid tears of joy which flowed heavily down his cheeks.

"I last saw my daughter 12 years ago, but she has never escaped my mind. I had started the process of filing for her to have her relocated to Jamaica with family members, but then came the terrible earthquake.

"When I first heard from her following the devastation, I was probably the happiest man. But my joys were further multiplied when I saw her today in the flesh," he added.

Brown praised the professionalism of Jamaica Defence Force soldiers who responded promptly to appeals from his family, searched for Paule and brought her home.

It was Doris Lightbody, grand-mother of the teenager, who made a passionate appeal to Information Minister Daryl Vaz for Paule to be found, as she was reportedly walking the streets of Port-au-Prince, hungry, cold, and homeless.

The girl was found living in a tent with more than 20 other Haitians and flown to Jamaica two days later, on January 29, aboard a Digicel-chartered flight.

"She will be attending a Salva-tion Army school in Port Antonio next Monday," said Paule's father. "Major Josue Bernabe of The Salvation Army, who is also a Haitian national, has volunteered to assist her with learning the English language. She knows a few English words; however, that is not enough. She is a fast learner, and pretty soon I know she will be able to attend regular school."

The obviously thrilled teenager, who held tightly to her father while muttering a few words about her favourite food, was bubbling with laughter.

"I am happy to see my father," she said, through an interpreter.

"I was scared after the earthquake, but now I am happy to be with my family."