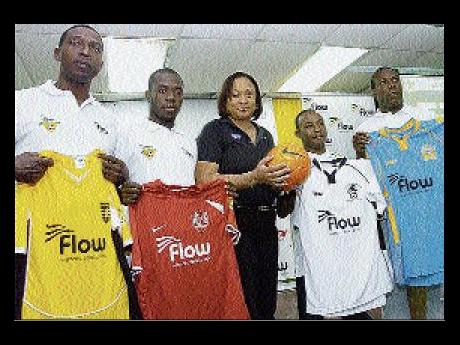 Action in the island's premier knockout football competition will commence on February 18 with the playing of the first round.

Each semi-final loser will receive $200, 000 while beaten quarter-finalists will collect $90,000. Other major incentives include $70,000 for the most valuable player and $50,000 each to the top goal-scorer and the winning coach.

"The Flow Champions Cup is the only all-island competition. A lot of the Premier League games are filmed and watched but what we do not see is the talent that exists outside the parish leagues and for us it is a great opportunity to have those talents represented on a national level," Sharon Roper, marketing director of Flow said. She was speaking at yesterday's launch of the championships at the Jamaica Football Federation's head office.

This year's competition will be staged under the theme "Represent" and will feature a 'Goals for Haiti' campaign. Flow and Sportsmax will donate $3,000 for each goal scored during regulation time to the Haitian Football Federation. A total of 66 goals were scored last season.

The competition will be played in a knockout-format, with the home teams being determined by draws which will take place at the beginning of each round. The top six Digicel Premier League teams as at the end of 2009 will not enter the competition until the second round. That round will be followed by the quarter-finals, semi-finals and final, which will be played at a neutral venue.

Edward Seaga, chairman, Professional Footballers Association of Jamaica, is looking forward to the start of the competition.

"We look forward to this competition as the premier knockout competition, as it is the one that takes us right throughout the country and it has always attracted a lot of attention," Seaga said.

The drawing of the teams to contest the first round provided two very interesting match ups. Portmore-based Naggo Head FC will host neighbours Portmore United, while KSAFA outfit Cavalier will entertain fellow confederation members Greenwich Town. Defending champions Boys Town are one of the six teams, which will not be in action until the second round.