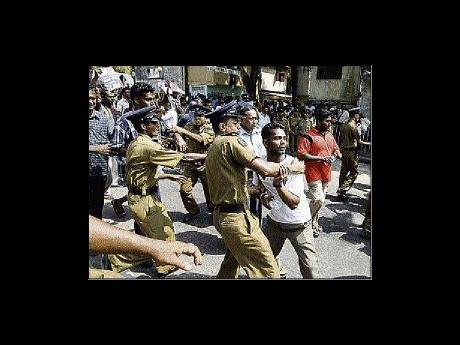 Opposition supporters protesting the arrest of their defeated presidential candidate scuffled with government-backers on the streets of Colombo yesterday before police fired tear gas and broke up the clashes.

Thousands of supporters of Sri Lanka's key opposition leader, Sarath Fonseka, crowded outside the Supreme Court, where an appeal was filed yesterday for the release of the former army chief. They burned life-size posters of President Mahinda Rajapaksa and smashed coconuts in the hopes of soliciting divine intervention in the country's political battle.

Government supporters then showed up and pelted their rivals with stones, when Fonseka's followers fought back, police fired tear gas and water cannons to disperse the crowd.

The clash was the first eruption of rising tensions in this Indian Ocean island nation since Rajapaksa secured a sweeping victory over his one-time ally last month. Fonseka, who led government forces in crushing the Tamil Tigers 25-year insurgency before defecting to the opposition, has claimed fraud.

Military police arrested him Monday on charges that he plotted a coup while still in control of the armed forces. Fonseka's followers say the move is meant to silence him and prevent him from contesting the April parliamentary elections.

A day after police dragged Fonseka from his office, the president dissolved parliament, setting the stage for the April 8 polls, when the ruling coalition is determined to cement its stifling grip on power.