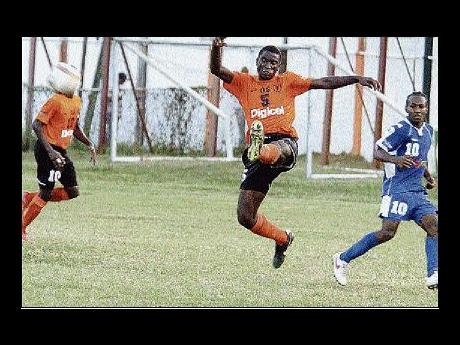 Jameel Thompson scored the game's lone goal in the 36th minute to put pressure on the out-of-action Harbour View.

August Town should have taken the lead in the 25th minute after a beautiful passing move. Malvin Stewart made a nicely weighted pass to Jermaine Fletcher whose expert square found an unmarked Aphas Bernard on the back post, but his side-footed effort from three yards out, unbelievably, went wide.

They were soon made to rue the miss when a long-range effort from Jameel Thompson in the 36th minute took a deflection off Ajuran Brown which left August Town's keeper, Devon Haughton wrong footed.

Four minutes before the half, Bernard got an easier chance to redeem himself and pull the score level, but again he made a meal of the opportunity.

After playing a slick one-two with the dangerous Akeem Thenstead and being released with only the goalkeeper to beat, Bernard lifted his shot over the crossbar from four yards out, even after the custodian had already committed himself and was lying on the ground.

"It was our game to win or lose, but we did not capitalise on our chances. (It was a) keenly contested game, I thought we had the better of the chances, (we) just didn't convert," said Young. "We had the better chances but that is how the game goes, if you don't score then chances you are not going to win."

Lenworth Hyde Sr, coach of Tivoli agreed that August Town should have scored at least twice.

Hyde said: "I think we performed well; I didn't like the first half. Even though we won the game, I don't think we played our brand of football. I think August Town had the better of the first half; they created two easy chances that they should have put away."

In the late games, Rivoli were scheduled to meet Boys' Town at the Spanish Town Prison Oval while Arnett Gardens were down to welcome Sporting Central Academy at the Anthony Spaulding Sports Complex.