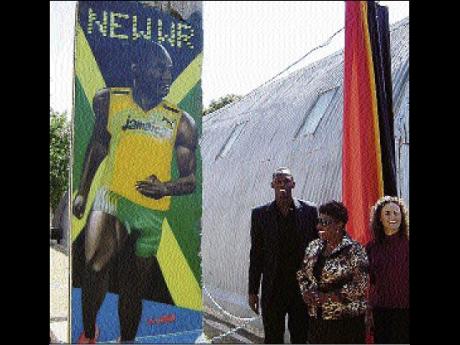 Sprint superstar Usain Bolt (third right), Sports Minister Olivia 'Babsy' Grane (second right) and Alexandra Consten from the German Embassy, look at a decorated piece of the Berlin Wall, which was given to Bolt, as a gift for his impressive showing at last year's Berlin World Championships, at Up Park Camp, yesterday. - Photo by Anthony Foster

The two-ton chunk of the Berlin Wall that was given to Jamaican sprint star Usain Bolt by the mayor of the German capital after his record-breaking performances at last year's IAAF World Championships in athletics, was unveiled at its temporary home at Up Park Camp, yesterday.

The wall is located at the Military Museum and Library, close to the main entrance of the Army base.

On August 24, days after Bolt's electrifying performances - running 9.58 and 19.19 to take the sprint double while lowering his previous world records of 9.69 and 19.30 - Berlin's mayor, Klaus Wowereit, gave him a piece of the historical symbol as a mark of respect of his accomplishments.

According to the mayor, the wall, which stands 12 feet tall and three feet in width and is decorated with Bolt's image, was "appropriate for an athlete whose world records in the 100 and 200 metres shattered the apparent limits of human performance in this 20th year since the fall of an enormous barrier to human interaction."

Bolt, who described his experience in Berlin as 'wonderful', was thankful for the gift.

"It was an honour to be presented with the two-ton wall, it touched my heart," said Bolt, while making mention of the first time he ran on a blue track and the support he received in Berlin.

Howard Aris, the Jamaica Amateur Athletic Association president, said: "What he has done in Berlin may not be matched unless by him again in the near future. Lets hope this will be a monument of friendship created through the opportunities of track and field and also our outstanding athlete Usain Bolt."

Major General Stewart Saunders, chief of defence staff, thanked the sprinter for entrusting the structure to the care of the military and described its presence as a great opportunity for the museum.

"Thanks Bolt, for entrusting his piece of the wall in our care. We will preserve it and facilitate its accessibility to the Jamaican people and people overseas," Major Saunders said. "We are willing to keep it for as long as you desire."

Accessibility to the public for viewing will be between Wednesdays and Sundays, 10 a.m. to 4 p.m. at a cost of $100 for adults and $40 for children.

Cultural attaché Alexandra Consten, who represented the Ambassador of Germany, reminded Bolt of the Mayor's message to him.

"You have shown, through your sports, that one can break down walls which may at one time, seem unbreakable," said Consten.

"This gift from the Germans is also tangible evidence that Usain has captured the imagination and the hearts of the people of Germany, and in fact, the people of the world," she said.

According to Bolt's manager, Norman Peart, the JDF was quick to accept the invitation to house the wall.

He said it would be temporarily housed at Up Park Camp, while adding, it might not be moved anytime soon.

The historical Berlin Wall, which divided East and West Berlin from 1961, was demolished in 1990.