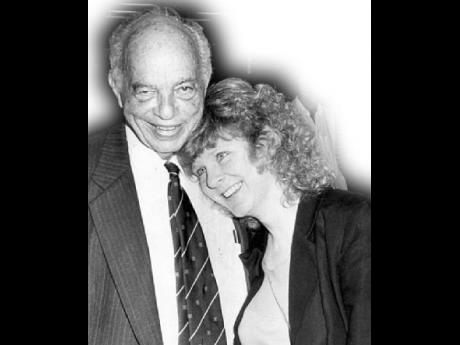 The late Paul Geddes, 81, and his new bride Margie, 36, are seen in this May 1991 Gleaner file photo, a month after the executive chairman of Desnoes and Geddes made the stunning announcement of their pending nuptials. - File

A LAW firm that took on business without a 'written' agreement is now $246 million out of pocket, on a ruling of the Court of Appeal that Margie Geddes, the widow of beer icon Paul Geddes, was not liable for contingency fees claimed by former attorneys for representing her company, which was forced into bankruptcy back in 2003.

Instead, the McDonald Millingen law firm was ordered, in a unanimous decision by Justices Howard Cooke, Hazel Harrison and Mahadev Dukharan handed down this week, to pay Geddes' legal fees incurred at the Supreme Court and appellate levels.

The appeal court judges, after interpreting the Legal Profession (Amendment) Act of 2007, held that Geddes was not liable for the muiltimillion-dollar fee because the agreement was not in writing, even though she had approved the billing rate in an email.

Justice Dukharan expressly discounted the argument made by one of McDonald Millingen's lawyers, Patrick Foster, QC, that an exchange of emails was sufficient to form the basis of a contingency fee agreement.

The Supreme Court judgment that the decision overturned was handed down on March 23, 2009 by Justice Jones, then in favour of McDonald Millingen, for Geddes to pay the firm $245.75 million plus interest at one per cent above the commercial rate, in compensation for legal represen-tation to Geddes and Bardi Limited over a four-year span.

The two sides were represented in the case by a phalanx of lawyers: Geddes, by Dr Lloyd Barnett, Roderick Gordon and Christopher Levers, instructed by Gordon McGrath; while McDonald Millin-gen was represented by Foster, Maurice Manning and Ayana Thomas, instructed by Nunes, Scholefield, DeLeon and Company. The appeal was heard October 27-29, 2009.

Ownership of Bardi Limited was originally shared by Margie and Paul Geddes, as the vehicle for holdings in soft-drink beverage and beer maker Desnoes and Geddes Limited - a company Paul Geddes pioneered but is now owned by Diageo Plc and trades under the name of its branded beer, Red Stripe.

Margie became the sole share-holder in Bardi after her husband passed away in 1999. It was her subsequent decision to dispose of the D&G shares to Bastion Holdings Limited that triggered litigation by trust company Jorril Financial Inc, to which Bardi was indebted - effec-tively invalidating the sale in a Supreme Court decision of January 2003.

On December of that same year, the court ordered Bardi wound up.

Initially, Geddes, who was represented by McDonald Millingen for close to a decade, since August 1999, paid legal fees to the firm based on invoices.

But as negotiations to wind up Bardi progressed, the parties reached an agreement in November 2003 that payment of legal fees to McDonald Millingen would cease and be replaced by a contingency fee of 15 per cent of any amount received from the realisation of the assets or surplus of Bardi Limited.

The law firm subsequently repre-sented Bardi in the Jorril case - though Justice Cooke noted that it appeared to be in a limited role of instructing other counsel paid by Geddes, not actual representation in court.

The case ended with Bardi being held liable in the Supreme Court for a debt of US$7.28 million to the trust company, relating to promissory notes priced at 12 per cent issued by Bardi to Jorril.

In April 2006, McDonald Millingen and Geddes amended their contingency-fee agreement to a rate of 32.5 per cent, and again, on February 4, 2008, to 40 per cent of any surplus realised after Bardi's creditors were satisfied.

The law firm continued to represent Bardi and Geddes in meetings and negotiations with stockbrokers, financial houses and the trustee in bankruptcy between November 2007 and April 2008. On the advice of McDonald Millingen, Geddes, within that six-month period, injected an unspecified amount of capital into Bardi in order to pay off its debts and preserve the surplus, which was identified in court documents as US$3.835 million.

The injection freed Bardi from its indebtedness to all creditors and the company is now "likely to be released from bankruptcy and the involuntary winding-up order of the court," the court documents said.

The lawyers in April 2008 then presented Geddes with a bill of US$1.787 million for 'professional services rendered', representing 40 per cent of the surplus realised, less the monies that the company owed Geddes.

Geddes did not pay the bill, but instead began raising concerns which, McDonald Millingen's lawyers later argued, in the lawsuit that the firm filed against Geddes to force payment, were irrelevant to the fee agreement.

Barnett, who represented Geddes on appeal, argued that for there to be a valid contingency-fee agreement it must be in conformity with Section 21 of the Legal Profession Act, requiring a written agreement which must state the gross sum or percentage agreed on; and that the amount must be fixed by the agreement.

Foster counterargued that the agreement in 2003, not being evidenced in writing as required by the act, did not mean that there was no valid agreement between the parties.

He produced as "clear and incontrovertible evidence" an email dated February 4, 2008 in which Geddes not only agreed to the firm receiving 40 per cent of the surplus but for that percentage to be taken out from the surplus before expenses were deducted.

The justices rejected that argument.

Additionally, Justice Cooke held in his judgment that Justice Jones erred when he sought to adjudicate the case on the assumption that a contingency agreement did, in fact, exist and that the question to be answered was whether it was enforceable.

"I fear this was an incorrect approach," Cooke wrote. "The first question should have been whether, on evidence, there was a lawful contingency agreement."

In the 2007 amendment to the Legal Profession Act, contingency fee is defined as "any sum - whether fixed or calculated either as a percentage of the proceeds or otherwise - payable only in the event of success in the prosecution of any action suit or other contentious proceeding".

Cooke held that the issues handled by McDonald Millingen for Bardi did not involve adversarial combat arising from a dispute, but were relegated to advice on how to realise a net positive result from winding up the company, and, as such, did not meet the test of being 'contentious'.

McDonald Millingen lawyers said Thursday that a decision was pending on whether to appeal the Court of Appeal ruling.