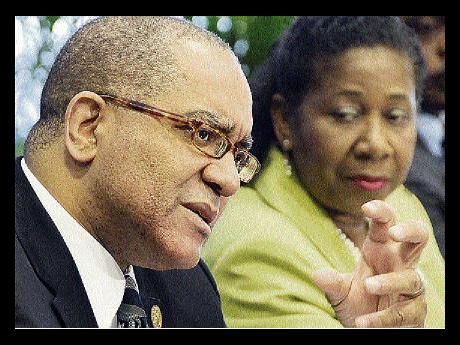 Brian Wynter, governor of the Bank of Jamaica, and Deputy Governor Myrtle Halsall at Wynter's first quarterly press briefing on monetary policy at the BOJ auditorium on Wednesday. - Rudolph Brown/Photographer

CENTRAL BANK Governor Brian Wynter, seeking to strike a tone of confidence after reports that some securities dealers could collapse under the debt exchange, said Wednesday at his maiden briefing on the economy that Jamaica may not need all of the US$950 million (J$85 billion) set aside as rescue funds for the financial sector.

"The amount now being contemplated might prove unnecessary," Wynter said at a quarterly press briefing at the Bank of Jamaica (BOJ) in Kingston.

The BOJ governor, now three months in the job, said margin calls from overseas lenders, capital flight and skittish response of depositors initially factored into several worst-case scenarios modelled by the financial authorities to arrive at the size of the Financial Sector Support Fund (FSSF), have not materialised so far.

The FSSF provides a US$350-million cushion for margin calls; the other US$600 million is for capital injection.

The Jamaica Debt Exchange (JDX) offer, which closed last week with a 97 per cent take-up, replaced bonds priced at an average of 19 per cent, with 23 issues whose coupon rates average 12.25 per cent.

The income streams from those bonds will be reduced, as a result, potentially affecting the liquidity of financial firms and draining capital.

The JDX transactions close next week, on February 16.

"We are well past the most risky period (although) there are still risks in there," the BOJ governor told journalists and analysts.

Wynter also suggested that the size of the FSSF was a moving target, with the BOJ boss failing to give a reason for the US$950 million agreed with the IMF being more the two times the US$400 million the Government initially said was being set aside to lend investment houses whose capital adequacy levels became troubled by the JDX.

"The amount we are working with continues to evolve," he said, adding that the entire US$640-million first tranche received by BOJ from the IMF three days ago was available for use to prop up financial institutions, should that become necessary.

But he said, too, that the fund could round off "maybe to US$800 million".

"We don't believe we will need the US$900 million-plus initially considered."

An abundance of caution

Peppered with questions on the wisdom of imposing a debt exchange that had the potential to trigger financial-sector dislocations to the tune of the nearly US$1 billion just to shave J$32 billion net of taxes off the Government's local debt stock, Wynter said the FSSF was conceptualised out of an abundance of caution.

The IMF portion, he said, however, can only be used for financial-sector support or balance of payments corrections.

Wynter also attempted to put distance between the BOJ and the FSSF, labelling the fund a government facility rather than a BOJ mechanism, even though the central bank will chair the Financial Regulatory Council to be set up to administer it and is to be delegated decision-making au-thority over which financial houses or banks get rescued.

While not as large, the new FSSF is reminiscent of the J$140 billion it ended up costing Government to rescue the financial sector after the 1990s collapse that significantly shrunk the number of banks and near banks.