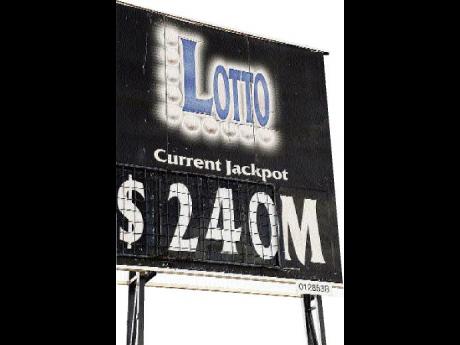 A billboard displaying the largest Lotto Jackpot in Supreme Ventures' history, just hours before one winner won it all. - Norman Grindley/Chief Photographer

It appears that a Manchester resident will be smiling all the way to the bank when he or she comes forward to claim the record $240-million Lotto jackpot.

Of course, the winner could also be someone who was just casually passing through the parish and decided it was the right time to take a chance.

No one had come forward up to late yesterday and Supreme Ventures Vice-President for Corporate Communications, Sonia Davidson, could not say if the winning ticket was purchased by a group or an individual.

She said the winner was required to claim his or her prize at the company's payment centre in New Kingston.

The previous record Lotto payout came in 2006 when the then jackpot of $140 million was won by Kenneth Neita.

According to Supreme Ventures, the jackpot has since then rolled once to $120 million in April 2007.

That payout marked the first time since the game's inception that the company had 10 winners of a single jackpot.

Supreme Ventures said in a statement yesterday that the prospects of a record payout had created a buzz around the game.

The organisation said it was looking forward to hosting the winner at a special presentation ceremony to mark the occasion.

In November 2008, Supreme Ventures refreshed the Lotto game brand by increasing the starting jackpot from $7 million to $15 million and the cost per ticket from $30 to $50.