Stay with the Cat 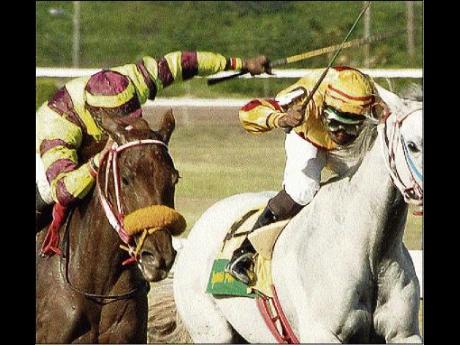 Tomorrow's 10-race programme at Caymanas Park offers no carryovers, the Pick-9 and Super-6 having been caught on a relatively easy card last Saturday.

Only six starters have been declared and indications are the winner should come from the trio comprising GIRLOFMYDREAMS, MING LEI and the consistent RIGGED TO WIN.

The Ryan Darby-trained GIRL OFMYDREAMS scored a long-overdue win over 1400 metres on February 3, beating RAJPUT (who renews rivalry) by 11/2 lengths. She returns on a similar $450,000 claiming tag and is not too high in the scales with 54.0kg and Shane Ellis again in the saddle to repeat, as she is likely to lead this small field.

There is not much to chose between MING LEI and RIGGED TO win on the basis of their last two meetings. both having finished in proximity to each other in two recent races. On the last occasion, MING LEI finished two lengths third to THE BEST MAN over 1200m metres on a $550,000 claiming tag, only half a length ahead of RIGGED TO WIN closing into fourth place. MING LEI enjoys a 3.5kg swing with RIGGED TO WIN in the scales, sufficient to confirm her superiority.

The sixth race (claiming $550,000-$500,000) over the straight-five course should resolve itself into a straight fight between the recent course winner SUGAR'S IMAGE and MEDICAL REPORT, both effective over the straight.

Of the two, MEDICAL REPORT who was a bona fide 'A1' horse up to six months ago, is the most accomplished in the field, and now dropped in class, will prove had to beat from the convenient mark of 54.0kg and title-chasing jockey Paul 'Country' Francis aboard.

SUGAR'S IMAGE, though up in class under new management, won so impressively over the course on a $450,000 claiming tag January 30 that he will ensure MEDICAL REPORT is fully extended in the nine-horse field.

The recent winner UNBRIDLED JOY and the horse she beat, NASATOL, should fight out the finish of the seventh race, again over the straight. UNBRIDLED JOY beat NASATOL by two lengths over 1200 metres on January 30 and both renew rivalry on similar terms. NASATOL now has the services of Paul Francis (replacing Harriston Lewis) and having run his best races over the course, is tipped to turn the tables.

The improving ALIAS MR. CAT, now bidding for a hat-trick following runaway victories in his last two races, holds the key to the eighth race over the straight, while THE GUV has worked too impressively (59.4 for five furlongs round) to lose the ninth over 1200 metres, in which nine have been declared.

The closing race over 1100 metres for $180,000 claimers should see the down-in-class pair of COCK ROBIN and STICKSONTHELOOSE, along with the improving GLOBAL MINISTER, in serious contention at the finish. COCK ROBIN usually has the beating of this level when right and thus gets the nod.