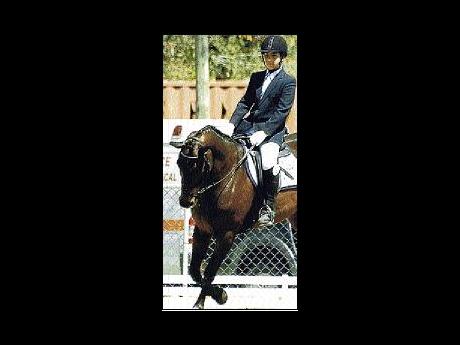 The Vaz brothers, Justin and Jonathon, topped the FEI World Dressage Challenge on Wednesday at the Kingston Polo Club, Caymanas Estates. Both are students at Hillel Academy.

Justin, who is preparing for possible selection (showjumping) to the first-ever Youth Olympics in Singapore in August, won the preliminary adult level aboard CASSANOVA. He had an overall percentage of 65.517 to finish ahead of Heidi Lalor (65.345) riding RUM AND COKE, Briana Schwapp third aboard TRELAWNY (64.138) and Susan Wates on MISS FRAN fourth with 62.759 in a field of 10 competitors.

Justin, 17, also topped the Elementary Adult Level Level with 63.08 per cent aboard SHABBA RANKS, who in recent years has been his customary horse in both dressage and show jumping events.

Following the event, a Jamaican senior team was selected comprising Justin Vaz, Wates and Schwapp. The team will take on Trinidad and Tobago, Bermuda, Cayman and Barbados in Zone 'A' of the FEI World Challenge Dressage in the months ahead.

Jonathon Vaz won the children's section aboard SHABBA RANKS with an overall percentage score of 67.931. He also secured second aboard another horse, ALI BABA, with 67.069, while 12-year-old Immaculate Conception student, Sara Misir, placed third aboard EYE CANDY with 62.757, and Jason Prouheze-Willets fourth on RUM AND COKE in a field of six juniors.

Justin and Jonathon are coached by Susan Wates, who praised both riders.

"They are very talented, hard- working and dedicated youngsters, and their parents, Richard and Janet, are always around to encourage them. Although the groundwork was set by their former coach, Yvonne Gore-Melville, Justin and Jonathan are easy to work with and both should go far in the sport."