To CVT, or not to CVT 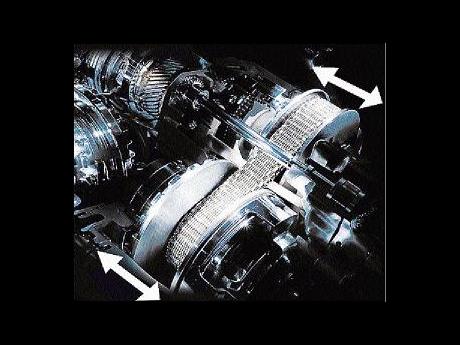 Here we see inside an Audi A4 CVT trans. Beside the arrows in the picture are the drive and driven pulleys, the drive pulley being the one at the top. In operation, the distance between the rim of each pulley can be adjusted, which exposes more, or less, of the cone shape to the belt, altering the gear ratio with respect to the other pulley. The arrows indicate the direction in which the halves can be moved.

I drove a car with a special automatic gearbox while shopping for a car last week. As I accelerated hard, engine revs climbed like it is supposed to - nothing strange there, except that the engine got up to speed much more quickly than usual. However, when I expected the gearbox to shift gears, it didn't - yet the car kept accelerating until I let up off the gas.

It was a strange feeling, and the sales rep didn't help much in explaining what it was, except to say that the car - a '99 Nissan Primera - had 'Hyper CVT'. What is a CVT, and how does it differ from a regular automatic?

Contrary to popular belief, most car engines do not make enough 'power' - and that word is in quotes deliberately - to move the car without help. A little mechanical advantage is needed, so auto designers use gear ratios to provide the engine with the leverage needed to get the car moving. Think of a 10-speed bike versus a fixed-wheel one - hill climbing on the fixed is going to be a little taxing!

Aside from the 10-speed, there are 21-speed cycles too. The highest amount of cogs on a bike that I've heard of is 24. The more gears there are, the higher the probability a combination of gears will exist to efficiently fit a particular situation. A continuously variable transmission (CVT) is the ultimate solution in finding the correct gearing, as the amount of ratios it has at its disposal is infinite.

In a 'conventional' CVT, a steel belt wraps around two tapered cone-shaped masses, or pulleys - much like the bicycle gears and the chain. One pulley is connected to the engine, and the other to the driveshaft(s). The difference is, instead of the chain moving - which happens in the bicycles - the pulleys move, and present a different circumference to the belt. Because of the infinite range of motion that the pulleys have with respect to the belt, these transmissions are said to be continuously variable, or stepless. Which is why gear changes aren't felt in a car with a CVT - the gears are so close together that there is no 'step'.

Let's say the manufacturer has determined that the engine makes peak torque at 4,500rpm. In theory, the tranny lets the engine 'freewheel' up to that speed, and the transmission computer will hang the load on the engine at that point, thus ensuring optimum acceleration.

Once the load lightens (i.e. the vehicle gains momentum), the system compensates by giving the engine more (lower numerically) gear until the driver backs off the gas. Don't back off, and the transmission eventually delivers a ratio greater than parity (1:1). Most CVT-equipped cars have a load vs engine speed table algorithm stored in memory, and the computer selects the perfect ratio based on the results of the computations.

Because of the infinite amount of selectable ratios, and the computer crosstalk between engine management and the transmission, this recently implemented technology theoretically heralds a level of efficiency engineers could only dream of in the past in terms of mileage, emissions and mechanical advantage. However, putting the theory into practice has proven problematic for some manufacturers, resulting in a lot of consumer enmity.

The technology has burnt every Japanese manufacturer with the exception of Toyota, as they are yet to put CVT into a mainstream car (like the Corolla). The Fit used to be sold locally through ATL Motors with a CVT automatic, but that option has since been discontinued, and the vehicle is now being sold with a conventional hydraulic trans. CVT is no doubt the way of the future, but it doesn't seem as if all the bugs have been exterminated as yet.