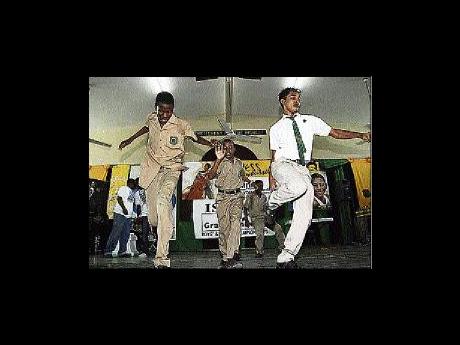 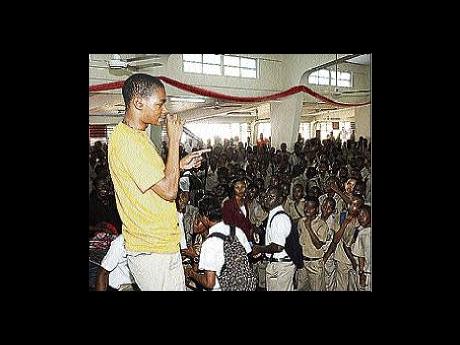 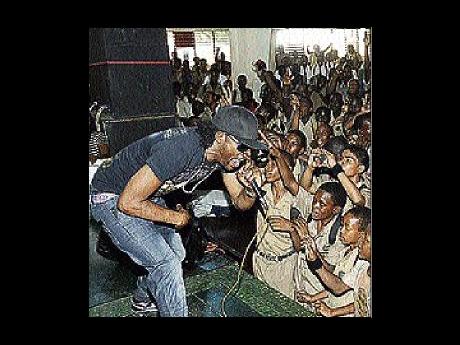 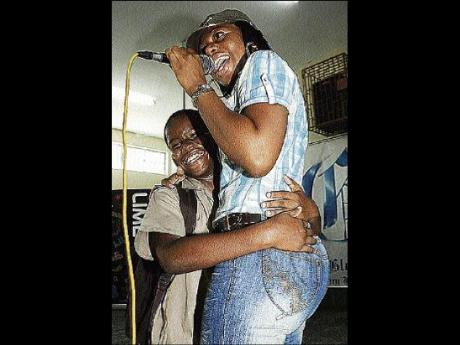 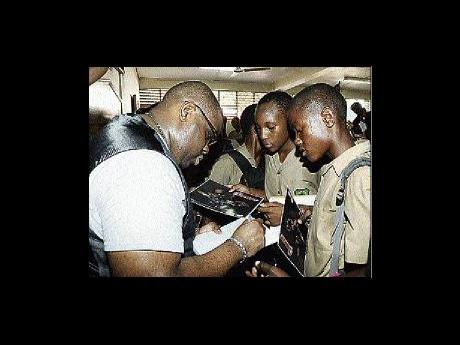 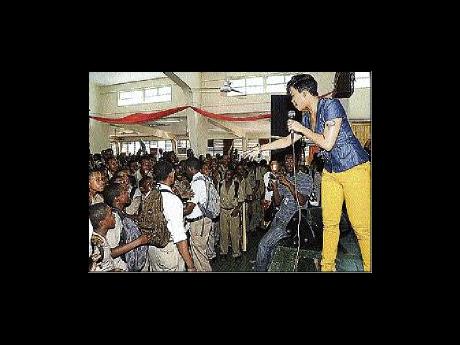 Ian Allen/Photographer
These students square off during a dancing competition at the Calabar High School yesterday as the institution hosted the Gleaner Champs 100 School Tour.

The Gleaner-powered Champs 100 High School Tour got off to a vibrant start yesterday afternoon at the Calabar High School in St Andrew, as hundreds of students, along with their teachers, packed inside the school's chapel to celebrate the legacy of Champs.

Used as a platform to celebrate the centenary staging of the ISSA/GraceKennedy Boys' and Girls' Championships, which sets off at the National Stadium, March 24-27, the six-week tour has also been fashioned as a means of energising the school population ahead of what is expected to be another exciting track and field spectacle.

Champs is widely regarded as one of the biggest meet, of its kinds in the world.

A number of top entertainers such as Demarco, Bugle, Raine Seville, Nikeisha Barnes and Cameal Davis joined Cutty from the Coppershot sound system as they condemned the recent flare-up of violence among students from rival schools and encouraged hard work and commitment towards achieving success.

Robertson and Weir spoke strongly against the continued tension between Calabar students and their rivals across the Corporate Area. They also used the opportunity to charge the students to reclaim the Boys' Champs title.

Angella Grandison-Reid, promotions and consumer services manager for GraceKennedy, tour sponsors and title sponsors for this year's championships, underlined her company's belief in the benefits of sports and expressed delight at its involvement with the exercise.

"GraceKennedy has always believed in sports. It's a great way to get our young people engaged in a positive manner. We are a company that believes in honing the talent of our young athletes, and we are happy to be on this tour," Grandison-Reid said.

Cecile McCormack, regional manager of Victoria Mutual Building Society, explained that she was pleased with the opportunity to connect with the students.

"VMBS has a school-saving programme and we believe that its important to build the discipline of saving from an early stage. We believe that joining this tour and being able to get into the schools will allow us to send the message out about the importance of saving," said McCormack.

LIME's Nathaniel Palmer was also happy to be a part of the tour and highlighted his company's commitment towards the development of youth talent.

"At LIME, we believe in investing in our young people, that's why we sponsor programmes in sports, education and youth development."

The Gleaner Company's special projects coordinator, Byron Buckley, explained the purpose of the tour and took time out to thank the sponsors.

"The Gleaner is pleased to start the Champs 100 celebration school tour here at Calabar High, the home of champions," said Buckley.

"The tour seeks to promote success through sports, and we are happy for the support of sponsors - GraceKennedy, LIME, Victoria Mutual Building Society and Cooyah. On your marks, get set, go!" Buckley commanded.

Racers Track Club sprint hurdler and Calabar old boy Warren Weir has the attention of the students as he addresses them.

Popular entertainer Bugle in his element during his performance.

This student is all smiles as he embraces one-time Rising Stars heavyweight Nikeisha Barnes.

Raine Seville dazzled every eye in the chapel.