Giant of a man 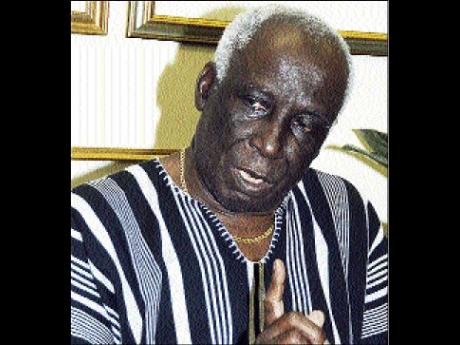 Professor Rex Nettleford, who died hours before his 77th birthday.

I have perused your online publications for any reflection from student representatives, past or present, on the late great Professor Nettleford's contribution to student life at the Mona campus of the University of the West Indies (UWI). It is in this vein that I beg your leniency to add a few words on this giant of a man.

I had the privilege of serving on the then Guild of Undergraduates as treasurer (1994-5) and president (1995-6). Both positions allowed for interaction with the late professor on a number of boards at the highest corporate levels of the university. It was here that I first saw Rex Nettleford's indomitable sense of fairness, and numerous displays of his legendary eloquence, wit and sharpness of mind. One could not help but get the distinct impression that he viewed the bureaucratic machinations of the institution with detached, wry amusement. This observation left us as student leaders, who were eternally at odds with administration, quite happy. We knew with utmost confidence that Professor Rex was always in our corner.

He was committed to the broadest access to education. He advocated for and spearheaded the distance education component of UWI. His instrumentality made a university education possible for large numbers of teachers, bank employees and others who utilised the UWIDEC programme.

On the recommendation of the professor, I was selected to represent tertiary students on the committee set up by then Prime Minister P.J. Patterson to review national awards and symbols. Here again his erudite wisdom, corporate skills, knowledge of 'Jamaicaness' were on display in each meeting of the committee. His guidance and management of the process allowed for the widest level of participation by members of the Jamaican society. There was a glimmer of triumph in his eyes when committee members unanimously reported from their various stakeholder meetings that the Jamaican people wanted the meaning of Black in the flag to change. No more must blackness be seen in the negative sense of hardship, but rather the victorious undeniable pride, resilience and strength that Rex Nettleford epitomised.

We did not fully appreciate the value of having, arguably, the 'Father of Cultural Studies' imparting to us importance of culture, even in a world shrinking under the effects of globalisation. Within a decade we would see that culture remains a decisive factor in global affairs.

Several years ago, we met again as he lectured at The Drum in Birmingham, UK. His call for the recognition of the commonalties possessed by, and the burden of history on, Britain's non-white ethnic minorities was contested by a few hearers.

In the reception that followed, a young man of Asian descent heaped accolades on the professor. He did the unthinkable, by suggesting that Professor Rex Nettleford ought to write a book! We were livid, hoping that he would stop. He proceeded to ask directly, "Have you ever thought of writing a book?" Displaying the classic cultivation and humility, which many have come to know, he answered, "I might have written a few."

I might have written a few! Surely, the professor ought to have been more dismissive of this ignorant upstart. But no, his answer encapsulated his approach to life - a path of patiently helping others to see the light of civility and human advancement. He condescended, but never put down: he lifted us all. Even here, he was the quintessential teacher - imparting knowledge but always leaving room for discovery.