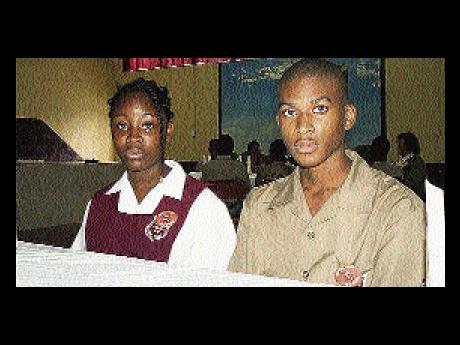 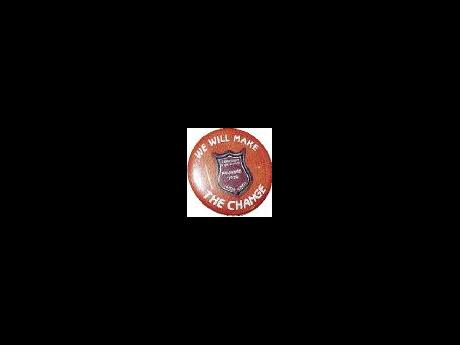 RIGHT: The 'We Will Make The Change' button worn by Ferncourt students.

There is good news coming out of Ferncourt High School in Claremont, St Ann.

Three months ago, a male student was stabbed to death, allegedly by a student from another school, on the compound of the school. But today, things are looking up.

In a move that was planned prior to the October 21 incident, justice of the peace and member of the Rotary Club of Ocho Rios, Pixley Irons, has led the way in the implementation of a mentorship programme geared towards grade nine students at the school.

The mentorship programme, now in its 12th week, sees members of the St Ann North East justices of the peace (JPs) visiting the school for several hours on Tuesdays and Thursdays, men-toring the more than 50 students in the programme, which includes 10 females.

On Tuesday, January 26, several of the JPs in the programme had a luncheon with the students inside the school's auditorium, affording the students an opportunity to interact with their mentors in a different setting.

Irons, speaking at the luncheon, said 12 justices took on the challenge to adopt students at the school and mentor them.

"You are young, gifted, beautiful, smart, you have the future in your hands. From this group, we would like to see, in the future, justices of the peace, mayors, judges," Irons encouraged the students.

The students in the programme wear badges with the slogan 'We Will Make the Change' forming arches above and below the school's crest.

According to one student, Julianea Rodgers, it simply means they were the ones who would engineer change at the school. Rodgers said she was already a product of the change initiative.

"Nowadays, I have more manners to people," she told The Gleaner.

Another student, Andel Lowe, said he had adopted a positive attitude. That, he explained, made him study more and spend more time doing his homework.

Meanwhile, two students who addressed the gathering on behalf of the group, painted similar experiences.

"For me, it is a pleasure to be part of the group. It is showing us that no matter how poor we are, we can succeed. Attitude determines how far we go," said Joviann Black in her presentation.

For his part, Okeem Bryan ended his presentation with the plea: "Continue to pray for us and to give us your support."

Coordinator of the programme, teacher Jacqueline Bailey Casey, said the students have benefited tremendously so far.

"I think they have gained a sense of self-worth, self-confidence, leadership and communication skills," Casey remarked during her presentation.

Guest speaker, custos of St Ann, R.O. Walters, addressed the issue of conflict management, urging the students to try to resolve conflicts peacefully. One way to do this, he explained, was to respect others' opinions, regardless of disagreement.

"Under no condition must conflicts be resolved by violence," the custos urged.

School principal, the Reverend Lenworth Sterling, praised the work of the justices of the peace, saying it was a timely campaign to impart positive values and attitudes.

The programme is expected to continue and will see a rotation of the students involved.