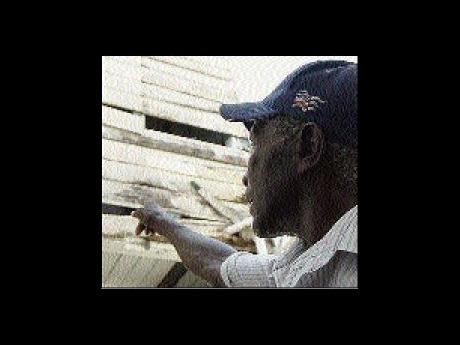 In this November 2005 photograph, District Constable Preston Moore of the deplorable Hope Bay Police Station in Portland points to an officer's living quarters where a section of the interior is clearly visible from the outside.

The Hope Bay police in Portland will soon be operating from new premises as a result of an agreement between the education and national security ministries.

A cottage adjoining the Hope Bay All-age School, which previously housed teaching staff, has been refurbished at a cost of approximately $10 million to accommodate the police station.

The three-bedroom, two-bathroom cottage was modified, with partitions put in to provide working space. New fixtures were also added, and the entire premises painted. There is still some minor electrical work to be done and the 17 policemen and women who serve the area are expected to move in upon completion.

Western Portland Member of Parliament, Daryl Vaz, who, along with acting commissioner of Police Owen Ellington, inspected the building during a recent familiarisation tour, said the facility will boost police efficiency.

The original Hope Bay Police Station was closed in 2006 as a result of its dilapidated condition.

Since then, the law-enforcement personnel have been operating from a privately owned two-bedroom house.