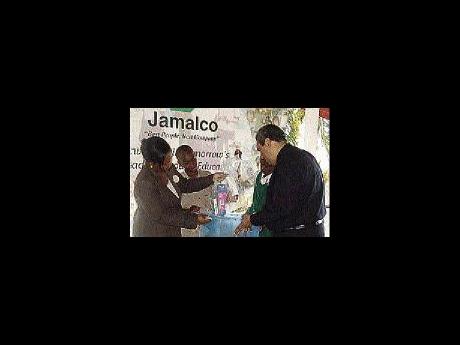 Photo by George Henry
Principal of Brixton Hill Primary School in Clarendon, Yvonne Ashley, and Jamalco's Managing Director Jerome Maxwell, along with students of the school, examine the contents of a science kit being distributed to schools by Jamalco as part of its 2010 book-distribution drive.

A drive to distribute over 30,000 textbooks and educational material to schools in Manchester and Clarendon was launched by bauxite company Jamalco on Monday at the Halse Hall Great House in Clarendon.

The books, which have been donated by United States publishers to the Brothers' Brother Foundation and brought to the island through funding from the Alcoa Foundation, put the number of books distributed by the Clarendon-based Jamalco to more than 560,000 copies in the last 29 years.

Addressing the launch ceremony, managing director of Jamalco, Jerome Maxwell, said the book distribution by his company should be viewed as a partnership leading to the success of the students, not just as a donation.

He said the company's slogan, 'Best People, Best Company', underscored Jamalco's drive to be the best company in the neighbourhood. Maxwell said his company was committed to helping schools, and that the book programme launched was just one aspect of its outreach activities.

The book-distribution drive has been endorsed by Collette Morris, literacy specialist in the Ministry of Education's Region 5, who commended Jamalco for organising the donation. She urged the students to make full use of the books.

Each school will receive an assortment of books and educational material. The company is also working with the Ministry of Education's regional offices for Clarendon and Manchester to ensure that schools experiencing low literacy levels receive books.

In the meantime, Leo Lambert, corporate services and government affairs manager at Jamalco, who also spoke at the launch, spoke to a number of educational initiatives which have been undertaken by the Clarendon bauxite company.

Among them are an educational assistance programme; a mentorship programme at Vere Technical High School, which is being expanded to two other schools in 2010; a documentation skills programme designed to improve literacy for residents in Jamalco's host communities; and a road-safety and school-crossing warden project being implemented at six schools in Clarendon and Manchester.

Lambert also announced that during this year, the company's employees will increase their participation as resource persons in schools.