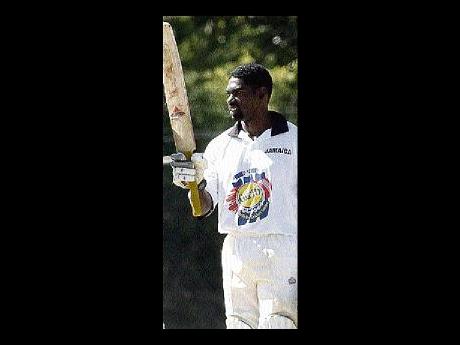 A memorable spell of spin bowling from Ryan Austin saw tournament leaders Jamaica collapse dramatically under lights against the Combined Campuses and Colleges in the WICB regional first-class championship yesterday.

Austin collected five wickets for 53 runs from 37 overs, as the Jamaicans plunged from 151 for one to a precarious 195 for nine at the close on the opening day in the fifth round match at the Guyana National Stadium.

The Jamaicans, with three wins out of three, won the toss and chose to bat on a placid pitch, and lost Brenton Parchment in the day's fifth over as he played down the wrong line and was lbw to Kevin McClean for nine.

But Jamaica quickly rebounded through the casual elegance of Pagon and the dogged defiance of Hyatt.

The pair settled in quickly and carried their side safely to lunch as little beat the bat.

Both batsmen brought up their half centuries midway through the second session.

The 26-year-old Hyatt notched his landmark first, off 139 balls with six fours, while the 27-year-old Pagon's soon followed, off 116 deliveries, also with six boundaries.

The pair stretched their second-wicket stand to 136 as the CCC effort began to flag in the afternoon sunshine.

Austin made the crucial breakthrough in the final over before tea just as the floodlights began to drown out the natural light.

Hyatt, who batted just short of four hours, played back to one that was a bit quicker and was lbw. He hit eight fours off 191 balls.

The final session was all CCC once Pagon departed 20 short of a fourth first-class century.

The stylish right-hander, who had two Tests for the West Indies five years ago, cracked 10 fours off 205 balls before he tickled a leg side catch to wicketkeeper Chadwick Walton off Kantasingh.

That wicket prompted the slide to become terminal as Austin and Kantasingh took advantage of a meek middle and lower order.

Nkrumah Bonner, on first-class debut against the team for whom he almost made his debut, was lbw to Austin for a six-ball duck.

Captain Tamar Lambert (10) also fell to the in-form Barbadian off-spinner, popping a catch to short leg at 175 for five.