'Local lads will lead the way' 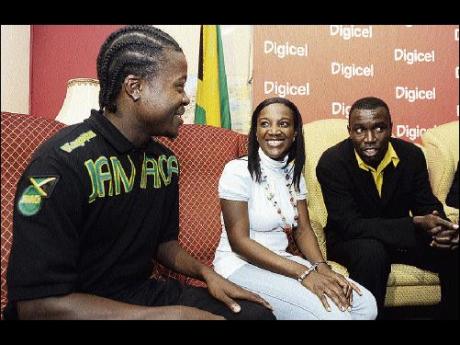 Ricardo Makyn/Staff Photographer
Local-based Reggae Boy Navion Boyd (left) of Tivoli Gardens is all smiles as he talks with Digicel's sports sponsorship manager, Paula Pinnock-McLeod (centre), while coach Theodore Whitmore looks on during a press briefing at the VIP Lounge at the Norman Manley International Airport shortly after the Jamaican team's arrival from Argentina yesterday.

Whitmore was speaking upon arrival at the Norman Manley International Airport from Argentina where the Boyz put up a gallant performance against South American giants and went down 2-1 with the home team scoring two late goals.

"I am having a local-based team and I might bring in a few 'foreigners' to fill a gap with a little experience," said Whitmore. "I am not really concentrating on the 'foreigners' now. My main aim right now is to groom and gel the local players," he added.

The team will next gather on February 22 for a camp, which will run until the 25th with the hope of playing a game on March 3. Whitmore will be looking to draft players currently participating in the Digicel Premier League and those who will be participating in the upcoming Flow knockout competition.

"We will be looking at the Digicel Premier League and the Flow competition, which will start soon and get in the players for the 22nd and hopefully, we get a game on March 3. The president is working on that," Whitmore said. "There is room for everyone. It might not be now, but the future of Jamaican football is good, based on the display against Argentina," he added.

Coach Whitmore further explained the reason for more schoolboys not being drafted on to the current squad.

Whitmore said: "We had a short time before the trip to Argentina and we had to sort out visas and all of that. We are in a rebuilding process and there are always going to be chances, but we have to take into consideration that they (schoolboys) must also concentrate on their schoolwork. So we cannot take a player out of school for three to four weeks."

The coach did admit that he was somewhat disappointed with the result in Argentina but insisted that he has to work with what he has at his disposal, including in the attacking midfield positions.

"We have heard the complaint that we are short of attacking midfielders, but the fact is if you ask persons to name one (attacking midfielder) right now, probably you will hear Theodore Whitmore. So it is just a matter of time. We have to work with what is available."