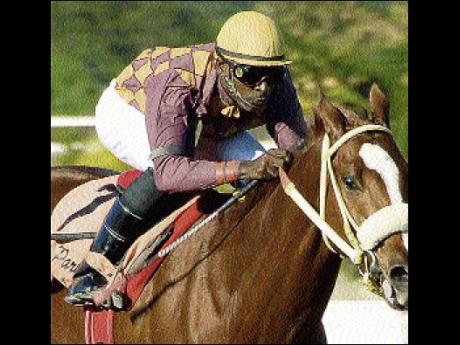 Colin Hamilton/Freelance Photographer
LIFEISJUSTFORLIVING (Omar Walker) cruising to victory in the seventh race for native-bred three-year-olds over 1000 metres round at Caymanas Park last Saturday. The Region of Merit-Bold Queen colt is owned by Church Pen Farm and trained by Wayne DaCosta.

Only six starters have been declared for the annual renewal of the James B. Dawes Memorial Trophy race over 1300 metres, feature event at Caymanas Park today.

Despite the small field, there is enough good form present to ensure a good betting race.

The Ryan Darby-trained GIRLOFMYDREAMS scored an overdue win at this level on February 3 when leading home RAJPUT by 1 1/2 lengths over 1400 metres.

GIRLOFMYDREAMS, with Shane Ellis again in the saddle, has picked up only 1.0kg and coming from an in-form stable, has the ability to win again in this small field. The five-year-old daughter of Deputy's Report made all on the last occasion and with no genuine speed present, will have to be caught.

GIRLOFMYDREAMS is again fancied to beat the back-to-form RAJPUT over this trip, while LADY WALES, who won over 1500 metres on January 3, has been tardy at the start in subsequent races and can ill-afford that luxury here. LUCKY EDDIE who has some form, will not find the distance too sharp and should run well without actually winning.

The two remaining runners, however, have first-rate chances. I think it will come down to a straight fight between MING LEI and RIGGED TO WIN.

Significantly, MING LEI is conditioned by trainer Owen Dawes, the grandson of the man in whose memory the race is being run.

Both MING LEI and RIGGED TO WIN have finished abreast of each other in recent races and it could go down to the wire.

When both horses last met on January 27, MING LEI, running on, finished two lengths third to THE BEST MAN over 1200 metres on a $550,000 claiming tag. This was only half a length ahead of RIGGED TO WIN who was closing from well off the pace for fourth. Prior to that, however, RIGGED TO WIN finished 7 3/4 lengths second to out-of-class COLEMAN'S ROCK over today's trip on Boxing Day, a mere half a length ahead of MING LEI who raced prominently in second until passed by RIGGED TO WIN in deep stretch.

Three weeks after that race, MING LEI was an unlucky loser to GOOD SENSE on a $450,000 tag in the Colin Melhado Memorial Cup over 1200 metres, having suffered interference at the half mile and losing narrowly in the end.

Mitchell again has the ride and with MING LEI enjoying a 3.5kg swing with RIGGED TO WIN based on their January 27 meeting, the four-year-old daughter of Tracking - Starathercommand is back with a grand chance of winning today.

I also like PRINCESS SHANNON in the fourth race for maidens, down-in-class MEDICAL REPORT to stop the super fit SUGAR'S IMAGE in the sixth, ALIAS MR. CAT to complete the hat-trick in the eighth and THE GUV (working well) in the ninth.