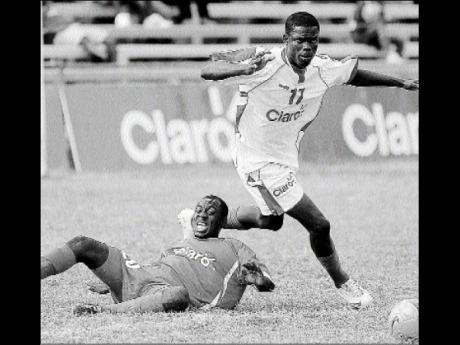 Ian Allen/Photographer
Boys' Town's Peter Keyes lies on the ground after being dispossessed by August Town's Ajuran Brown in their Claro Jackie Bell KO match at the Harbour View Mini Stadium on Sunday. August Town won 1-0 to reach the final.

The annual general meeting of the Jamaica Bridge Association was held on Wednesday night at the Police Officers' Club, and popular president Rex James was re-elected for another term in office. Richard Phillips was elected vice-president while Valerie Marshall and Ulla Dahl were returned as secretary and treasurer, respectively.

For the first time, the executive committee (floor reps) included a designated youth team rep and Walter Brown was unanimously elected as such. Other committee members were Hubert 'Brodsy' White, Dr Michael Coore and Elizabeth Williams.

Meanwhile, in the only tournament action for the week, national representative Karl 'Beenie' Lee and Wayne Chai Chong franked their recent good form by winning Monday's leg of the Horace Payne Trophy with a 62.27 per cent round. Rex James and Judy Ziadie came second (60.91 per cent) and Audley Astwood and Winston Chin-You third (60.45 per cent).

This year, a blue flag will be flown at all the venues and all the games as a symbol to the teams and participants' support for the campaign to prevent child abuse.

Ardenne High, Campion College, Wolmer's Boys and defending all-island champions Camperdown High all advanced to the semi-finals of the 2009/2010 Corporate Area Schools Chess Championship last Saturday at the end of play at the Campion College Library.

The feature match between Calabar A and Ardenne High lived up to its top billing, as the teams played to an exciting 2-2 draw during regulation play. Ardenne took the game in extra time.

In the other Corporate Area quarter-final matches, Wolmer's Boys survived an early scare to come from behind and defeat Kingston College 3-1, defending champions Camperdown thrashed Calabar B 4-0, and Campion A registered a 4-0 default win over Campion B as the latter fielded only one competitor, who lost the lone match.

In the semi-finals scheduled for today at the Campion College Library, the home team will face Wolmer's Boys and Camperdown will face Ardenne.

Arguably the two best teams in the E-Services-sponsored Portmore Division Two, mid-season champions Racing United and Christian Pen, clash in what should be a hot contest tomorrow at the Racing football field at 3 p.m.

This will be the third meeting between the teams for the season. The first match saw Christian Pen winning 3-1, Racing got revenge last week Sunday, with a 4-1 penalty kicks triumph, in the mid-season final. This match could be the tie-breaker in their head-to-head battles. Racing lead the league with 18 points, followed by Christian Pen on 15.

In other games, Hellshire United tackle Braeton United at 1 p.m. at the same venue; Daytona and Watson Grove kick off a double-header at the Watson Grove football field at 1 p.m., while Hamilton Gardens battle Westport in the feature at the venue at 3 p.m.

Teams will be battling for points as the league enters its fourth round. Leaders on goal difference, Cumberland (seven), should get maximum points from struggling Portsmouth (one), in the opening match at 1 p.m. at the Cumberland High School, while fourth-place Daytona (six) will have to contend with second-place Passagefort (seven) at the venue at 2:45 p.m. Wanderers, who were surprised 1-0 by Passagefort in last Saturday's round, will take out their frustration on joint bottom club Arlington United (one) at 1 p.m. at the Passagefort field, while in the feature at 2:45 p.m. Ascot (one) face fifth-place Waterford (four) at the same venue.

The mid-season final of The Captain's Bakery competition will be played on Wednesday at York Oval, starting at 3 p.m. Sanstar edged Heartease in their final game by 1-0 to book their spot against Prospect in the battle dubbed asEast vs West.

Prospect booked their spot by defeating bottom-place Sunrise 4-0 with a brace from the competition's leading goalscorer, Tyson Robinson. He now has seven goals.

Silver Stock is the 11th team to qualify for the National Round of 16. Earlier, E-3 of St Elizabeth became the 10th qualifiers after clipping Arlington 3-2 in extra time at STETHS, also on Thursday. The teams had earlier played to an exciting 2-2 draw in regulation time. The final set of qualifiers are expected to be known this weekend, with St Catherine, Portmore, St Thomas, Portland, Hanover and St Ann hosting their finals.