Driving with my dog! 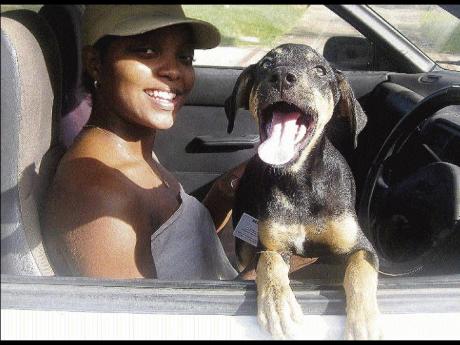 SAFETY FIRST: Ensuring the safety of the pets, before taking to the streets, should be the number-one priority for pet owners.- Contributed

It has become fashionable for well-groomed and even well-attired dogs to travel with their owners in air-conditioned splendour. In some instances, the pets can be seen travelling with their heads protruding from the vehicles as they enjoy the cool tropical breeze and take in the view.

But like any other passenger, there are certain rules that motorists must adhere to in order to ensure the safety of their dogs while they are motor-vehicle passengers.

According to Kenute Hare, director of the Road Safety Unit in the Ministry of Transport and Works, motorists must take care to effectively secure their dogs inside their vehicles for their safety, that of the animals, pedestrians and fellow road users.

"Motorists must protect their animals while driving. Travelling with an animal is about safety first, as an unrestrained dog can distract the driver and can be injured or killed if an accident occurs," he said.

Hare pointed out that a dog's head and feet should not be seen hanging outside of a moving vehicle, because such an act could potentially become a safety hazard.

"The dog must be properly restrained with a safety harness, or the windows rolled up," he continued. In fact, Hare explained that the safety harness should be attached to the seat belt and strapped around the dog's chest, back and shoulders, then the seat belt fastened, in readiness for a journey.

Life insurance agent Shadiik Manya, 23, is the proud owner of a shih-tzu that he only travels with on special occasions.

"I don't take Bonzi to many places. He's a pretty dog and the ladies like him, so I travel with him on occasions where there will be females in attendance," he said.

"Sometimes I take him in my Honda Civic and other times in the Pajero. But I notice that he behaves a lot differently in each vehicle. In the van he has more space, so he stays in the back seat and gazes through the back window. But he becomes more of a distraction to me when he is the Civic because it's a smaller vehicle and he tends to jump in my lap, on to the steering wheel or on to the floor of the car, and at those times I can make a mistake and step on him instead of the pedal. These movements can be hazardous, especially for inexperienced drivers," Manya explained.

It is for such reasons that Superintendent Radcliffe Lewis, head of the Traffic Division of the Jamaica Constabulary Force, said he and his team members look out for motorists, who travel with pets in their cars, to ensure that they adhere to the safety guidelines.

"The law says once the animal is travelling in a vehicle and has access to people, it must be muzzled," he said.

"If the animal is not muzzled, it must be restrained inside the vehicle and the owner must ensure that its head and feet remain inside. If this is not done and the dog bites a passer-by while its head is on the outside, the owner can be prosecuted because dog bites are a serious matter and can attract serious lawsuits," he explained.

Superintendent Lewis was not prepared at the time of the interview with Automotives with the details of the fine a motorist would face in such a situation, but said that no matter the reason a motorist and/or owner would wish to put forward in support of a pet having to protrude from a moving vehicle, it is the motorist's responsibility to find a way to protect himself, the passengers and the animal. He also said if all failed, steer on the side of caution by muzzling the animal before taking off on a journey.

Manya agreed that motorists travelling with their pets must adhere to the safety rules because his experience is that while travelling to the country, Bonzi tends to bark a lot at things he would see on the outside and would even try to jump through the window to get at the distracting items.

"So, especially on long runs, make sure to keep the windows of the vehicle rolled up," he said.