What next, Mr Golding? 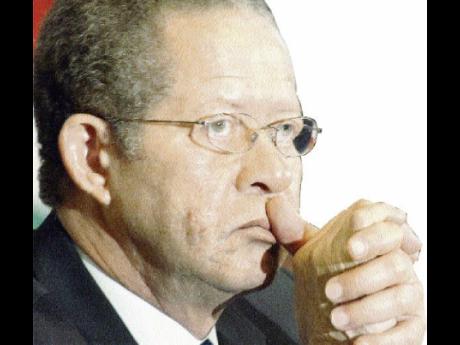 The International Monetary Fund (IMF) negotiations are over and the Government has secured a new extended-fund facility for Jamaica. As expected, it has brought great angst to the already economically distressed among us, but importantly, it has placed the Government in a policy straightjacket which will prevent it from engaging in the irresponsible, populist economic pandering which has characterised government's economic stewardship since we bade the fund farewell in 1995.

The most significant effect of the IMF's presence so far has been to start a process which could bring an end to the pyramid culture that has dominated the Jamaican economy for years. We are all aware that thousands of Jamaicans have been players in the recently exposed pyramid schemes like Olint and Cash Plus. But not many are conscious of the extent to which the pyramid phenomenon has permeated the economy. Government derided the known schemes and was icily unsympathetic to those who were caught under the rubble of their collapse. But it would have been well advised to heed the biblical admonition, how can you say to your brother, 'Brother, let me take the speck out of your eye,' when you don't see the beam in your own eye? Because the financing scheme operated by Government for many years during which it ran up the national debt was distinguishable from the exposed pyramid schemes only by the official seal it bore. In all other respects they were the same.

A pyramid scheme is an unsustainable financial arrangement in which investors are paid high returns although there is no prospect of commensurate earnings being realised from the use to which the investments are put. Pyramids rely on two things: first, a constant inflow of new funds (usually from new investments) to fill the gap between returns paid to investors and amounts earned on the funds; and second, a willing suspension of disbelief. But no matter what mechanisms are used to sustain payments on the investments, sooner or later, the point is reached where the inflow of funds is unable to cover the payouts to investors. The scheme then collapses and the investors lose much of their investment.

The Government's high-yielding debt scheme was destined to meet the same inevitable end of all pyramids: collapse. At no time did it ever have any hope of creating value to support the interest payments it was making to its investors. Nothing to which the Government applied the intake from these schemes was capable of creating value to match the interest it was paying out. In fact, much of the principal value of these funds disappeared into the black hole of Government's operating deficits. The Government's scheme survived for as long as it did because it was borrowing increasing amounts to pay interest on old debt and because the Jamaican taxpayer was there to provide a reliable stopgap.

The present debt-exchange programme (JDX) is a brave attempt to avert the looming collapse of Government's officially sanctioned pyramid scheme and might well signal an end to the pyramid culture, which has dominated our approach to investment and earnings for many years. This culture, with which our people have been infused, of expecting to earn without producing, is among the principal reasons that we have lost the ethos of thrift, hard work, entrepreneurship and sacrifice which we once had. This cultural defect has reversed our productivity and competitiveness and our ability to keep pace with a rapidly growing developing world.

For years, small and large owners of Jamaica's domestic capital have been riding the high-interest-rate wave of official and unofficial pyramid schemes and have spurned investing in production and real wealth-creating activities. Between the exposed pyramids and the Government's scheme, over a trillion dollars of the country's investable capital, an amount greater than our GDP, has been caught in these economically regressive arrangements instead of being used as the fuel for economic dynamism and developments. The mirage of financial success of these pyramids has left a belief in Jamaica that there is no need for people to produce or even to work to make money. While the movie Wall Street audaciously proclaimed "greed works", our Government, by promoting its own pyramid, has by example, taught us to believe that in Jamaica it is idleness that works.

It is little wonder that just as people protested when Government took steps to bring the other pyramid schemes to an end, great sympathy and concern are now being expressed by leading figures in our society for some whose previous unjustifiable earnings from Government paper will be brought closer to normality by the debt-exchange programme.

Where was this sympathy and concern when it really mattered? When interest rates were racing towards the stratosphere and hard work, enterprise and productive employment were being destroyed? It was these high interest rates, the reduction of which is now being lamented with so much feeling, that helped cripple the productive base of the economy, set back the growth of entrepreneurship, and strangled the Government and our taxpayers with a debt which will retard the country's development for generations.

Hardly a productive enterprise has been created during this era of high interest rates. Half our manufacturing capacity has been wiped out, and much of our agricultural land now lies fallow. Productive small business has virtually disappeared.

Unfortunately, the new IMF programme does not address this damage to our productivity, and there is no plan to correct and reverse our state of diminishing production. The programme only seeks to fix the Government's fiscal and balance of payments crises. It advances no plans or ideas to tackle the country's crisis of production, a crisis underlaid by the chronic uncompetitiveness of our economy. This is the real challenge that lies ahead: achieving a state in which the goods and services produced within our economy cost no more than similar items produced in the countries with which we trade.

Key to this will be compressing costs within the domestic economy. The reduction in the cost of government debt, and the cost of government overall, is only a start. It does little if anything to address the cost and shortage of capital for production in Jamaica. This is because despite the virtues of the JDX, over $1 trillion dollars of investable Jamaican capital remains tied up in local and foreign government paper and out of production. And it will remain there, unless a deliberate policy of replacing this, still expensive, Jamaican-owned debt with low-cost multilateral and bilateral debt is pursued.

Government has a responsibility to see that the cost of capital within Jamaica is brought to internationally competitive levels in order to satisfy the country's need for productivity and competitiveness. But the spreads between the cost of funds and the lending rates applied by Jamaican banks are too far above the international norm. Despite the interest-lowering objective of the JDX, I do not believe the Government will be able to depend on these banks to voluntarily lower their spreads and fees to international levels. And I continue to believe that Government must be prepared to use its regulatory powers to force bank-lending rates and fees down to the levels that will give production in the country a chance to be competitive.

The Government also has to use fiscal and monetary policies to align incomes in the country with economic output. We are not going to be able to match the costs at which the rest of the world produces if the aggregate incomes of those engaged in the same production here are higher than they are in other countries. There are policy tools available to the Government to move these costs in the right direction, but they are all as politically difficult as has been the condition-ality of the present IMF deal.

Having taken the first small step towards changing economic course by committing to reduce the cost burden of Govern-ment on the economy, the Golding administration is now faced with the choice of either implementing difficult production-oriented policies to stay on course to development, or turn back. The course now being pursued with the IMF could lead to the same successful outcomes we had begun to see in the late 1980s and the beginning of the 1990s. But the prime minister must be prepared to make the tough choices Eddie Seaga did in the 1980s, which led to relative economic competitiveness, investments based on the productivity of our workforce, productive dynamism in the small-business sector, and growth in private-sector employment.

Our key strategic objective must be to make the things produced in Jamaica competitive. The desired outcomes of economic opportunity and prosperity will follow naturally. If these economic policies are accompanied by good social policies, Jamaica could eventually become the peaceful, orderly and desirable place in which we want to live and raise our children.