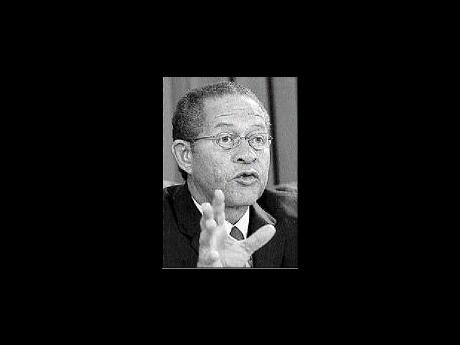 Prime Minister Bruce Golding has good enough reasons to support the Cybercrimes Bill after a recent incident left him holding thousands of US dollars in credit-card debt.

Golding told fellow parliamentarians he had the shock of his life after his bank told him that thousands of US dollars in purchases were made on his Jamaican-issued credit-card account during a two-day spending spree.

Golding, who had not travelled outside Jamaica in months, said his bank advised him that the money was used to buy several plane tickets.

The incident, which occurred three months ago, was traced back to hackers thousands of kilometres away in the United Kingdom.

The prime minister, who was making a presentation on the new Cybercrimes Bill, recently returned by the Senate to the Lower House for amendments, said he was reimbursed, the account immediately closed, and a new credit card issued.

"We are particularly familiar with the lotto scam in Montego Bay. It is not just the crime and the fraud that is committed, it is the murder to which it gives rise," Golding stated.

The prime minister said that more consumers were carrying out business transactions via the Internet, and in the United States alone the value of e-commerce sales for 2009 was almost US$100 billion.

He said that tackling cybercrime is particularly complex because it allows for virtual anonymity. "It is what they call illusive scene of crime," he pointed out.

Some of the cybercrimes, he said, may not be "criminally intended but just plain mischief to spread a virus, to create excitement and panic, and to demonstrate that, as powerful as these systems are, somebody can compromise them".