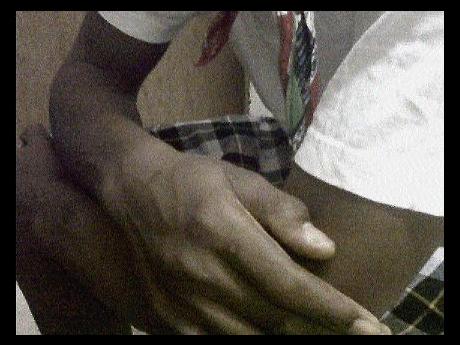 This inmate nervously relates his story.

Staffina landed in the Freeport lock-up, Montego Bay, a little over a week ago. She has not had a court hearing and she says she does not know why they (the police) have held her on suspicion of murder.

Weaving between fantasy and reality, Staffina fiddles with the silver trimmings on the blue tee shirt she is wearing over a pair of jeans. Shod in flip-flops, she curls and flexes her toes repeatedly.

The 14-year-old Westmoreland student attempts to explain her plight, but forgets details.

"From last week Friday night dem carry me in here. Dem say me know bout murder, but me nuh know nutting. At first a me mother dem hold, then dem let her go and hold on to me and me brother. Me brother in the same lock-up here. Him gone a court today, but me nuh know when me going, maybe Monday," says the teenager, running her fingers through her neat corn rows.

She describes the night the police came. "Me inna me house and dem come and say 'Pack a bag and come, we a go carry you down, you must know something bout the murder.' Dem say dem would question me and bring me back. All now dem nuh carry me back.

"All me know is that a man get killed. Him used to be a conductor. Me see him already, but me never talk to him yet. Dem say dem going to put me on ID (identification) parade," she says with head bent and eyes downcast.

When asked about her parents, she says her mother has a business and has been to see her on visiting days - Tuesdays and Thursdays.

Staffina shares a cell with three adults. She says they are her friends.

"Reasonable suspicion of robbery", that is what 14-year-old JJ was booked for two weeks ago. The small-bodied youngster clad in blue Chicago Bulls shorts and black tee shirt relates how he was picked up by the police while he ran a shopping errand for his stepfather.

"Him give me money to go and buy seasoning. So me and me friend stand up at a big gate near the market. The police drive up, dem see a spliff tail on the ground, pick it up and ask which one a we was smoking. It wasn't me, and I told dem and dem say, 'How you eye look so red?' Dem handcuff me and carry me in here," says JJ, attempting to clean the dirt from his overgrown fingernails.

The youngster, who lives in St James, shares a cell with six other inmates, all older than him. He says three had gone to court, and he and the others were "just chillin" when he was called out.

Raheemis doing his second stint in lock-up. He has a court date coming up and is confident that his mother will get him out.

"Me mother promise to get me out. A tru me violate me probation why me in here. Me just a help out a friend, and me get myself in problems," he said, twisting a handkerchief in his hand.

The problem teenager, who just turned 17, says that a friend of his was bleeding from a stab wound and asked him to take him home on his bicycle.

"Me never want stop, because me probation say me mustn't be seen on street after seven, but tru a friend, me tek the chance. Later ina the night, the police come for me," says Raheem.

He shares a crowded cell and hates the long hours of lockdowm. "Sometimes all eight and nine a we in a deh cell. Me have a 'one man stream' (a bunk for himself) still, and me get half a towel."