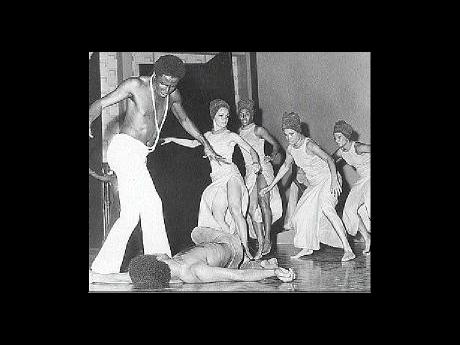 The National Dance Theatre Company of Jamaica (NDTC) will commemorate the life of its founder and late artistic director, Professor Rex Nettleford, with an evening of movement, music and tribute at the Little Theatre on Tom Redcam Avenue in Kingston on Tuesday, February 16.

A limited number of tickets are available at the Little Theatre box office for the performance, which begins at 7 p.m.

NDTC's Associate Director, Barry Moncrieffe, says that the approximately 50-member cast and crew, including the new-generation dancers, NDTC singers, musicians and creative technicians will join the company's founders, bridge generation and administrators in paying homage to their iconic leader, principal choreographer and dancer, who passed away on February 2.

Among the presentations will be Nettleford's full-company work, the ancestral Kumina, created in 1971. Dance Captain Marlon Simms succeeded Nettleford as 'King' in 2008 and will be joined by Keita Marie Chamberlain, who retains the role of 'Queen', originally performed by NDTC founding member, the late Pansy Hassan. Musical Director Marjorie Whylie will guide the singers in the traditional folk form, with support from Master Drummer Henry Miller and the NDTC percussionists.

Against the backdrop of the recent devastation in Haiti, as well as Nettleford's extensive work in the discovery of cultural identity within the Caribbean community, the company will remount Incantation by Haitian choreographer Jean-Guy Saintus. The piece debuted in 2004, in celebration of the bicentenary of Haiti's independence.

The NDTC singers and orchestra will perform a suite of repatriation songs arranged by Marjorie Whylie with Carole Reid, Faith Livingstone and Jhana Williams (sopranos), Dulcie Bogues and Dawn Fuller-Philips (contraltos), while the bass line will be carried by Earl Brown, Heston Boothe and Leighton Jones, with Carl Bliss, Howard Cooper and Wesley Scott as tenors.

Secretary/Treasurer Bridget Spaulding will lead the tributes to Nettleford, with other contributions from Kerry-Ann Henry and representatives from the bridge generation of the NDTC.

Barry Moncrieffe voiced the sentiments of the company: "It is an extremely difficult time for all whose lives have been touched by Professor Nettleford. At the NDTC, we have been particularly blessed with 48 years of his passion for artistic expression through dance, theatre, music, and art. On Tuesday, we honour Rex on the occasion of his final curtain call."

He continued: "While we all miss him dearly, we celebrate his life by ensuring the renewal and continuity he envisioned for the NDTC in the true spirit of volunteerism and dedication which he himself embodied and expected of us all. Above all else, we are committed to keeping his legacy alive and well."

Moncrieffe also advised that two days after the commemoration, the NDTC dancers will perform at Colour Museum, a show produced by the Edna Manley College for the Visual and Performing Arts.

Rehearsals continue in prepara-tion for the upcoming biennial tour to New York, with performances on March 6 and 7. The NDTC is artist-in-residence at the Brooklyn Centre for the Performing Arts, Brooklyn College, where the tour has become a staple on the calendars of Caribbean nationals living in the Tri-state area.

The associate director said that the annual Easter Sunday morning of Movement and Music is scheduled for April 4 this year, and the company will open its 48th season of dance during July.

The NDTC was co-founded in 1962 by Rex Nettleford and Eddy Thomas. The birth of the NDTC as Jamaica gained independence from Britain heralded the exploration of the nation's unique cultural identity through dance, theatre and music.