No rights in 'Hell'- Memories of riots haunt former inmate 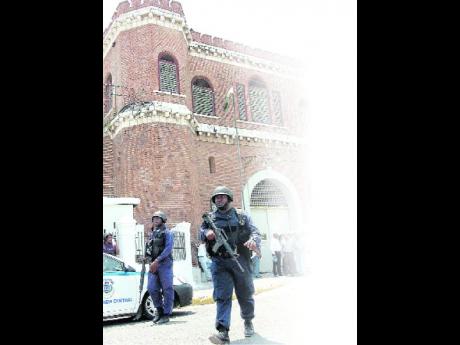 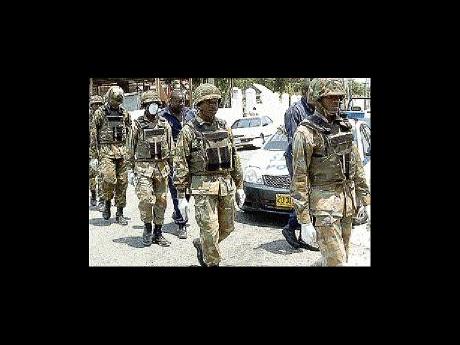 Policemen patrol outside the Tower Street Adult Correctional Centre in downtown Kingston on March 31, 2005, after one warder and three inmates were killed during an attempted prison break.

The riot by inmates at the Horizon Adult Remand Centre last week has resurrected painful memories for David Grey, who was an inmate at the Tower Street Adult Correctional Centre during the last two major prison riots in this country.

Back home after 12 years in prison, Grey had deeply buried the images that marked the two riots that he witnessed; but the news that 40 inmates and nine warders were injured last week led to a resurrection.

"Me know what di man dem at Horizon a go through, and that includes the warders, because you have some good warders in the prison," Grey told The Sunday Gleaner.

His voice dropped as he remembered the four days of rioting in 1997 at the maximum-security prison, which was then the General Penitentiary but has since been renamed the Tower Street Adult Correctional Centre.

"Man did vex from the night when we hear say (John) Prescod (then head of the Correctional Services Department) say condom fi give out a prison. By the next morning, it was worse, when we hear say him say all warders fi get condoms, too," Grey said.

"In the morning we hear say the warder dem walk off the job, and every man just start lick off dem cell door and come out, and the place just explode," added Grey.

When the authorities finally regained control of the prison, the death toll stood at 14 - all prisoners.

The authorities claimed that the killings resulted from some inmates attacking others accused of being homosexuals.

"But is not all killings was because man gay. Some man did have a vendetta against another man from long time. Even if a man have a 'chargie' who did give evidence against him, this was a chance to kill him," Grey said.

He explained that 'chargie' referred to persons charged jointly for one crime.

"Once the riot start, you have fi mek sure say you have a weapon, if is even a piece of stick that you sharpen, because even if you and a man have nutten, him might have you up and use this as an opportunity to rush you."

According to Grey, the warders and soldiers were brutal as they regained control of the prison.

"If a warder never like you long time, this was his chance fi bruck you up. Me see inmate get lick until him hand bruck, him foot bruck, and dem still a beat him," added Grey as he remembered fellow inmates who have permanent scars from those beatings in a place he called "Hell".

Eight years later, Grey was to relive those moments as three inmates and a warder were killed in what the officials labelled an attempted prison break.

It was alleged that a visitor to the prison managed to get a gun to an inmate who attempted to shoot his way out.

"They were saying the man was firing at the warders, but while the prisoner did have a gun, him did near the D-North section so him couldn't shoot the warder. Is like a four shot him have inna the gun, and when dem done, him drop it and run."

The officials claimed that the prisoner shot three warders, one fatally, during a shoot-out that left three inmates, including the shooter, dead and others nursing multiple wounds.

Grey said: "After him drop the gun, him run, but there is nowhere in prison you can hide. Once dem lock down the prison and search, dem must find you. Dem find him and execute him.

"A nuff prisoner get beat up and shoot up and handcuff pon the ground with the bullet wound and bruck bone. All the police and solider dem just step over dem.

"I believe you have a prisoner who deformed now because dem mash him up bad, claiming that him did attempt to escape and dem did see him," said Grey.

According to Grey: "Once you in prison and you are poor, warders will mash you up, and if you nuh have no money or a lawyer you can't get justice."

He had a haunting message for inmates of the Horizon Adult Remand Centre injured in last week's mêlée:

"If you no have no money, you just have to hold your wound or try and cry out to the media and hope the human-rights people take up your case, because when you deh a prison, you no have no rights."

Members of the security forces arrive to secure Tower Street Correctional facility in downtown Kingston on March 31, 2005, after three warderns were shot in the prison.- File photos