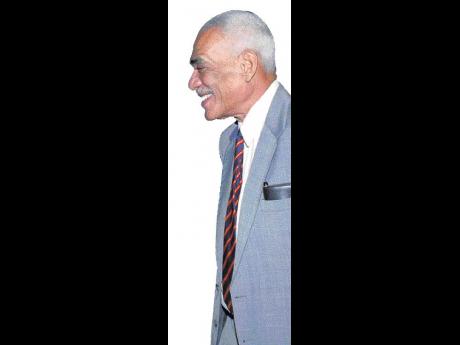 Eminent jurist Howard Cooke retired on February 10 after 20 years on the Bench, five of which were as a Court of Appeal judge.

He was lauded at a special sitting of the Court of Appeal last week for his great contribution to the development of the justice system, as well as for his fairness, benevolence, thoughtfulness and humility.

The large turnout of friends and members of the legal profession at the ceremony was a clear indication of the high esteem in which he is held.

President of the Court of Appeal the Honourable Seymour Panton said Justice Cooke was eminently deserving of the public gesture.

He was a teacher before he studied law. He was an assistant Crown counsel in the Office of the Director of Public Prosecutions (DPP) from 1978 to 1980, when he was promoted to Crown counsel.

Justice Panton said when he met Justice Cooke in 1978 at the Office of the DPP, he was immediately struck by his dedication to duty, and that dedication persisted throughout his career.

He described Justice Cooke as one of the most hard-working judges he had ever met. He said his rise in the judiciary was due to his dedication, his commitment, his capacity for hard work and his very practical approach to the art of judging.

"He has been a tower of strength and a sound source of advice to me and the Court of Appeal during the time we have worked together," Justice Panton said.

Chief Justice Zaila McCalla described Justice Cooke as one who was always willing to share his knowledge and to undertake necessary research on legal matters.

She said he was well known for his enthusiasm and never com-plained about his workload "even at times taking on more than his fair share".

The chief justice spoke of Justice Cooke's passion for the law and said she needed to place on record her deep appreciation for his assistance with the orientation programmes introduced recently for judges and resident magistrates. She spoke of the agility of his mind and pointed out that he was well known for coining unusual words and phrases, some of which would no doubt in time be incorporated into the Oxford Dictionary and other publications.

Dr Lloyd Barnett, on behalf of the General Legal Council,

Jacqueline Samuels Brown, president of the Jamaican Bar Association, Director of Public Prosecutions Paula Llewellyn, QC, Solicitor General Douglas Leys, attorney-at-law Ian Wilkinson on behalf of the Norman Manley Law School, and attorney-at-law Robert Fletcher on behalf of the Advocates' Association of Jamaica, also paid glowing tributes to Justice Cooke. They all spoke of his humility, exuberance, helpfulness and passion for justice. They wished him all the best during his retirement.

Justice Cooke, in his response, said he was quite overwhelmed by the occasion. He said he enjoyed his tenure as a judge and at no time did he ever consider the work a chore.

"The work of a judge is humbling," Judge Cooke said in his summation of a judge's work. "I find that the more the attainment of learning increases, the more it becomes evident that there is still so much more left to grasp," he said .

He thanked all those who supported, encouraged and assisted him in the pursuit of his avocation. He said, "Most particularly, I wish to thank my wife Heather (an attorney-at-law) who has been a bedrock of support, especially when at times the sling and arrows of outrageous fortune were aimed in my direction."