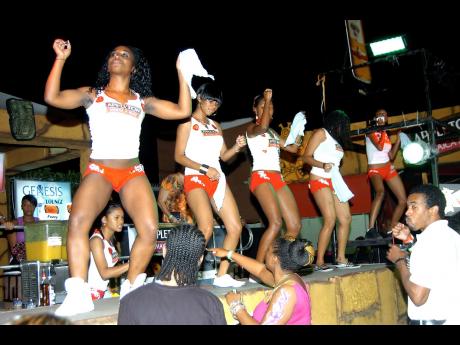 The Appleton Girls entertained the crowd. 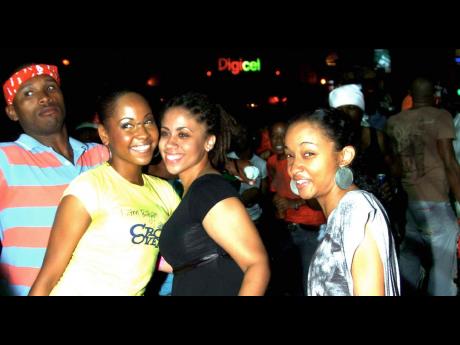 The vibe and energy did not start to build at Bacchanal Treasures on Friday night at Mas Camp, New Kingston, until the selector started playing some of the older soca songs.

When Sparkles Disco played Pearl Jam's
Footsteps
and Alison Hinds'
Faluma
, the patrons got into a frenzy. They threw water, jumped, skipped and waved. Even in the VIP booths that were relatively quiet before, there was dancing. While patrons were more responsive to the older songs, 2010's
Palance
was also a hit, with many of them singing along. So too, was Destra Garcia's
Bacchanal
.

There was even more energy as the selector played Black Eyed Peas'
I Got A Feeling
, to which there was intense jumping all around the venue. The dancing intensified when Serani's
Skip To My Loo
and Ding Dong's
Holiday
were played. Everyone did recent dance moves like 'summer swing' and 'skip to my loo'. As the song finished and soca started playing again, it was obvious that many patrons yearned for more dancehall songs. In the last few minutes of the party, the pace got slower with the selector allowing the patrons to 'simmer down' to songs like Sherwin Winchester's
Riding It
. Soon, some patrons started to leave, knowing the party would not go beyond 2 a.m.

But this week was different from last week, as at 11 p.m. the venue was almost empty. Even at midnight, there was still a lot of space, in contrast to last weekend when gates were closed because the venue was not able to hold any more patrons. Eventually though, things picked up. The venue filled to capacity, allowing for limited movement.

In the earlier segment of the party, the selector mixed the older soca songs with the new ones. And, there was also a full supply of soca songs from Jamaican artistes like Beenie Man, Macka Diamond and Busy Signal.

Throughout the night, the Appleton girls provided entertainment for the men. They gyrated on the bar counter and poured liquor. Patrons also got the opportunity to win prizes from Digicel's Egyptian-themed booth. There was also a buzz of activity coming from the Matterhorn Chill Zone, Acropolis and Smirnoff booths.