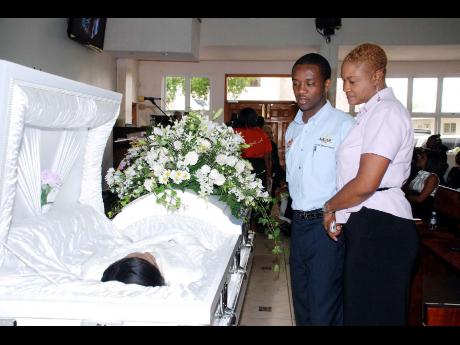 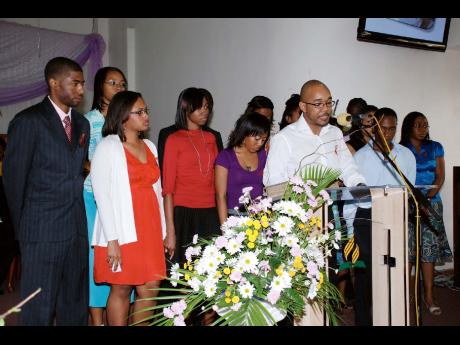 Kareem La Touche, coordinator of The Gleaner's Youthlink magazine, along with writers and other personnel affiliated with the youth mag, pays tribute to the late Patti-Ann Lothian yesterday.
1
2

"Help me to treasure my enemies, for they alone can help me see my faults. Help me to honour those who love me and never turn away from the ones who need me the most."

These were the words from a prayer written by Patti-Ann Lothian, whose family and friends, including
The Gleaner
's
Youthlink
team, gathered to celebrate her life at the Andrews Memorial Seventh-day Adventist Church yesterday.

Lothian, a writer for
Youthlink
magazine and co-host of the once-aired Youthlink on Radio programme on Power 106 FM, was a student at the Caribbean Institute of Media and Communication (CARIMAC), specialising in multimedia, at the time of her death.

Throughout yesterday's funeral, family members, friends, classmates and co-workers praised her in tributes for acts of selflessness.

Sean Bennett, a CARIMAC classmate, stated that he could feel her glow whenever she entered a room. Mention of her name conjured up memories of bright eyes and a huge grin. He said she was like magnet.

"On Monday, I came to class and there was no glow, but I won't cry anymore," Bennett said. "She wouldn't want that."

Dr Lori-Ann Fisher, cousin of Lothian, recalled the spirit of the youngster who had a huge heart for children.

She told mourners about the numerous charity activities in which Lothian was involved. Fisher also echoed the sentiments of
Youthlink
coordinator, Kareem La Touche, who stressed earlier that Lothian approached every task with serious intent.

La Touche recalled an assignment on street children in which she had to interview a young man living on the street. He said Lothian took the assignment further frequently visiting the young man and begging his mother to help him get a national identification card to open a bank account in order to save the money he would make from a job as an apprentice gardener, which she assisted him in securing.

"Today, we celebrate how she lived, not how she died. She was a true egalitarian. She will always live on in our memories," La Touche later told
The Gleaner
.

Lothian, 19, was found dead on February 1 in a crashed Toyota Fortuner SUV in a ditch along the Mona main road leading to the University of the West Indies.