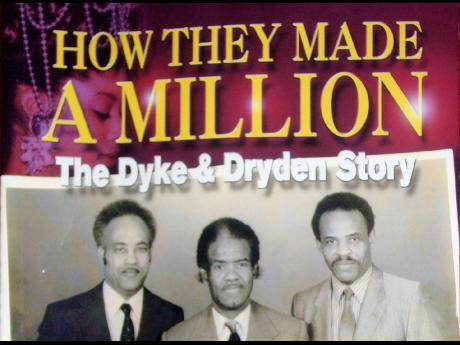 IN JUNE 1968, three West Indians, Len Dyke, Dudley Dryden (Jamaicans) and Tony Wade (Montserratian) started Dyke and Dryden Limited from an old partnership, Dyke and Dryden, whose core business was the selling of records, especially pre-released ones, from Jamaica.

But Wade was not happy with the number of records lying unsold on shelves. He suggested to his partners that the retailing of hair and skin products for black people was a better business. Their advisers and accountants did not agree.

Yet Wade was adamant, since he clearly saw a gap to be filled. His associates acquiesced and the entire stock of records was put out for sale. With the records out of the ways, the selling of cosmetic and hair products for black people in London became their bread and butter.

The black community was pleased, and Dyke and Dryden fast developed a big clientele of mostly black females. The original store at West Green Road was now outselling itself. Other shops were acquired, but not without racist opposition, tacit and blatant, from many quarters, including British Rail. The shops became social outlets in many ways, and the stocks were later diversified to include products for white people.

In addition to being a retail outlet, the West Green Road shop also housed the administrative offices and a makeshift warehouse. More space and money were needed. To address this, Wade put some of the products into his car trunk and drove around to local chemists and drug stores to find space. Some stores gladly received them for they were already being enquired about. In the cases that he met with resistance, he left the goods on a consignment basis, but he didn't have to return for them for they were sold off and reorders made.

With this new development, there was no staff to carry out this level of distribution, so Wade had to pack and deliver the products by day, while invoicing at night after coming in with new orders. Delivering to a Londonwide clientele was the next step, followed by towns with large black populations.

Expansion meant more funding, so they approached their bank manager, who flatly turned down their application.

"Annual turnover at the time was £250,000 and cashflow projections showed quite clearly that the £10,000 we were looking for could easily be met. This was a major blow, and explains just how some bank managers held back legitimate black businesses with sound track records," Wade writes in
How They Made A Million - The Dyke and Dryden Story
(available at Novelty Trading).

Stung by this rejection, they changed their bank and were successful in getting a loan of £15,000. He was also to figure out that the manager who refused to give them a loan could have done so, since he was able to secure a personal loan of £22,000 from a different manager at the same bank. New team members were also to come on board, and the company's operating philosophy was made clear to everyone.

Since the leading suppliers of black hair and skin products were in the United States, Dyke and Dydren had to ensure that they had enough stock to meet the United Kingdom demand. Regular trips to New York, New Jersey, Chicago, Tennessee and Atlanta were made to network and meet with suppliers. Dyke and Dryden was warmly received and business contacts established.

Wade: "The market had expanded significantly, and by 1986, turnover had reached the magical figure of £5 million, which at the time was quite an achievement for a black business in the UK. Len, Dudley and I always regarded modesty as a virtue and the credit for this performance always went to our staff who were the backbone of the business."

But hair fashion was changing and Dyke and Dryden was not going to be left behind. They had an idea for a new type of curl. Wade pitched it to Paul Davies, a manufacturing chemist based in south London and owner of Tor Chemicals. Joan Sam, Wade's former secretary and now business partner, joined the project and with Davies they came up with the first perm gel ever formulated and developed in the UK. It was branded 'Super Supreme Curl'.

Wade: "The research and development breakthrough was a big one for British industry in that it removed the total dependency in the UK on US-manufactured products." The range comprised a gel perm, neutralising solution, shampoos, conditioners and a hair-dress. The brand performed beyond expectations and Tor Chemicals could not keep up with the production demands. Another co-manufacturer had to be brought in.

Under the name, Natural Beauty Products, another brand was launched, then a sodium hydroxide professional relaxing system was developed for processing the "straight look", which only got off the ground when Soft Sheen products of Chicago bought a controlling interest in the company.

It was also a success, especially in Ghana and Uganda. Curl Control, under the Natural Beauty trademark, was no less successful, and all the brands found a niche, even in east and west African markets. Curl Control became popular in Holland.

Still seeking ways to bring in more money to the company, Wade decided to manufacture Afro combs, which were imported in great volumes from the United States. They simply required a mould and production time, but supplier after supplier rejected the idea.

Wade: "Not one to give up easily, I was still constantly on the look out for a factory that might just be persuaded to take on the assignment and, as luck would have it, I spotted one while shopping in Wood Green."

Without an appointment, he went to Atlas Plastics and asked to see the sales manager. The guard brought back the factory foreman instead. When Wade explained what he had gone about, the foreman introduced him to the sales manager who was quite amused by the comb that Tony used to comb his own hair right in front of him. The sales manager agreed to produce as long as Dyke and Dryden was willing to meet the tooling cost outright, with a minimum first production of 30,000 combs.

Wade agreed, and that again was a successful decision, as the factory could not keep up with the demand for Afro combs produced in the UK. On one of his visits to the factory, Wade asked the guard why he had brought the foreman and not the sales manager when he had first visited. The guard said he thought Wade was just another black man seeking work in the factory.

But the company was to suffer another setback when it attempted to get funding for the development and distribution of a cocoa butter cream and lotion for the white population. It was a hit with white females, and the sampling campaign created huge demands. A nationwide distributor was needed, and so was more money, but their bank refused to finance the project. Wade and Dryden was crushed.

"We were devastated. Some months later, an identical product, including the wording we wrote, appeared under a different brand name which today is to be found in every high street store in the country. This could easily have been the Natural Beauty brand, had our bank supported us."

Next week: The conclusion.