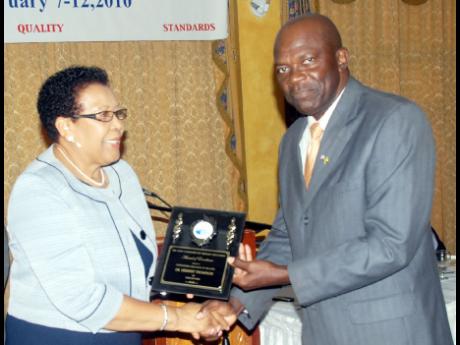 Dr Herbert Thompson, president of Northern Caribbean University, has been recognised as outstanding educator by the Joint Committee for Teacher Education and the University Council of Jamaica (UCJ).

Thompson was awarded for his strong commitment and determination in expanding tertiary education and was selected from a cadre of fellow educators, any of whom he confessed could have come out on top.

"I am humbled and grateful that the UCJ saw it fitting to have recognised the worth of my work in this area of education," said Thompson. "This award, though, is dedicated to the life and work of a father figure and mentor of mine who passed on recently, Mr Lyndon Daley, who, during my most formative years, groomed me into becoming who I am today."

Dr Ethley London, executive director of UCJ, in heaping accolades on the awardee, told the audience that "Dr Thompson's honour is fitting at this time, as exemplified in the true meaning of commitment, leadership and determination in expanding the access to tertiary education for Jamaica and the Caribbean."

Minister of Education Andrew Holness, the guest speaker, said the Government needed to reduce the subsidy on tertiary education offered through the teachers' colleges, the University of Technology and the University of the West Indies. The minister was, however, quick to point out that this plan was definitely not a retreat by the Government from providing access to tertiary education.

"The Government's plan is to put in place a system of partnership between parents, students and the Government where the Government encourages parents to 'put aside' something for a down payment for at least the first two years of the child's university life," he said.

In addition to the Outstanding Educator Award, the UCJ also awarded outstanding students, one from each of the 30 accredited institutions of higher learning recognised by the UCJ in Jamaica.

Missionaries of the Poor Institute of Learning, St Michael's Theolo-gical College and United Theolog-ical College of the West Indies were recipients of certificates of registration.